Layers and layers of laser-cut plastic were used to create the chandeliers in this exhibition by Cuban-American artist Jorge Pardo, taking place at London's Victoria Miro gallery.

Characterised by his diverse background in painting, sculpture and product design, Pardo's exhibition focuses on the "revaluation of objects, images and architectural space".

The exhibition presents both the Mexico-based artist's chandelier installations and his wall-mounted, three-dimensional works, which he creates through the use layering and light manipulation.

"Celebrated for his use of vibrant colours, eclectic patterns and natural and industrial materials, Pardo draws on the historical intersections of fine art, architecture and design to create a highly individual body of work," said the curators.

The installation features a series of large-scale lamps with rectangular or triangular motifs, ranging from one to 1.7 meters tall.  Each is made from angular strips of laser-cut plastic resin arranged in fringed formations.

"While the lamps themselves possess sculptural form as objects, sometimes recalling natural phenomena such as animal and plant life, the light they emit, variously controlled and directed, is less tangible," said the curators.

"This is experienced in the spaces between each work surrounding architecture – an irregular play of light, variously controlled and directed, is less tangible," they explained.

In addition, a series of two to five-metre-tall wall-mounted works occupy the ground floor of the exhibition. Each features faceted layers with perforated and milled angles that appear to shift and dissolve like an optical illusion.

The wall-mounted works are coloured in hues of red, orange, yellow and blue, and feature circular motifs that resemble craters.  Underneath, the layers have a rippled effect designed to suggest the flow of water.

"Poised between the organic and the manmade, the practical and the poetic, Pardo's art playfully insists that form needn't necessarily follow function instead suggesting multiple and mutating definitions and applications that toy with our expectations," they said.

Jorge Pardo's works are on show at the Victoria Miro gallery in London's Islington, between 2 February and 24 March 2018

Artists previously exhibited at the gallery have included Alex Hartley's, who installed crumbling modernist ruin in the gallery's gardens, and Do Ho Suh, who created a series of colourful structures to represent his experience of migration. 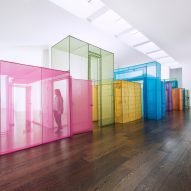