A fragment of the Robin Hood Gardens housing estate salvaged from the demolition site by London's V&A museum is to be transported to Italy and displayed at this year's Venice Architecture Biennale.

The V&A acquired a three-storey section of the estate last year in addition to the fragment it will take to Venice when demolition work on the brutalist social housing estate began.

At a press conference about the forthcoming Venice Architecture Biennale the museum's director, Tristam Hunt, unveiled plans for its exhibition titled Robin Hood Gardens: A Ruin in Reverse.

The exhibition at the Pavilion of Applied Arts in the Arsenale, will see pre-cast concrete elements from the facade of the building erected over a scaffold structure designed by Arup – the engineers of the original building.

Muf, the London-based architecture practice that first proposed the museum acquire part of the estate, will work on the project with Arup.

One of the estate's key features are its aerial walkways, or "streets in the sky", which will be recreated for the exhibition.

The V&A has commissioned Korean artist Do Ho Suh – whose architectural installation at London's Victoria Miro gallery saw visitors queue around the block – to produce a film to be screened at the event. The artist is known for his full-scale installations using panels of transparent fabric and wire, and his film will focus on the building's walkways.

The exhibition will also include interviews and archive photography of the social housing estate, which was designed by British architects and Alison and Peter Smithson and completed in 1972. Like several of the UK's post-war housing estates, it is being demolished before the end of its expected life.

At the 1976 architecture biennale, the Smithsons presented a billboard-scale photograph of Robin Hood Gardens during construction.

They wrote at the time, "a building under assembly is a ruin in reverse." Now in what the V&A describes as "bittersweet circularity" the museum has chosen to title its show A Ruin In Reverse.

"Robin Hood Gardens: A Ruin In Reverse asks the questions that face all of us about the future of social housing," said Hunt.

"The case of Robin Hood Gardens is arresting because it embodied such a bold vision for housing provision yet less than fifty years after its completion it is being torn down," added exhibition curators Olivia Horsfall Turner and Christopher Turner.

"Out of the ruins of Robin Hood Gardens, we want to look again at the Smithson's original ideals and ask how they can inform and inspire current thinking about social housing."

This will be the third time the V&A museum presents at the Biennale, which this year is curated by Yvonne Farrell and Shelley McNamara of Irish practice Grafton Architects under the title Freespace. 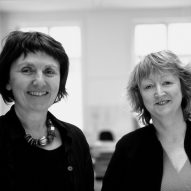 The collaboration was instigated by the V&A's late former director Martin Roth, and an Venice Architecture Biennale Fund has been set up in his memory.

The exhibition will be open throughout the Venice Architecture Biennale, which takes place from 26 May to 25 November 2018.