A continuous flight of steps covers the roof of this home in Chile by Max Núñez Arquitectos, which runs parallel to the site's steep slope down to the Pacific Ocean.

Casa Ghat is located in the region of Cachagua, roughly two hours north of Santiago. It is sited on a dramatic incline overlooking the ocean, a feature that helped inform the architecture firm's design.

"Its design, structure, internal organisation, and the lifestyle proposed within it, were determined by the pre-existing conditions of the topography," said Max Núñez Arquitectos, a studio based in Santiago.

Fifteen columns of different dimensions support an expansive roof that follows the slope of the site. "Below this oblique plane, a diagonal interior space contains the different programs of the house," the firm said.

Wooden volumes enclose private areas of the home, which encompasses 340 square metres in total. These contrast the exposed concrete that forms the structure and common spaces.

"Three of these volumes contain the private rooms, and the fourth, smaller in dimensions, contains a direct access to the roof from the inside," they said. 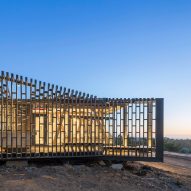 The upper level contains four bedrooms, in addition to a small lounge area. This floor also has access to the rooftop via a concrete staircase.

Another oversized set of stairs leads down to the public areas, which overlook the ocean through floor-to-ceiling glass walls on three sides. Here, the architects included furniture that matches the wood grain found in the private volumes.

An additional bedroom is located at the back of the house, behind the kitchen. A separate entrance allows guests to come and go without passing through the rest of the home.

The architects intentionally used a regular structural grid, to highlight the irregularity of the site. "The monotony of the free plan is redefined by the slope, creating an interior topography of varying levels with different sizes and heights," the studio said.

Chile's western coast stretches more than 6,000 kilometres along the Pacific Ocean, providing ample dramatic locations for clifftop homes and beachside dwellings. Some examples of buildings that take full advantage include a blackened timber house by 2DM, a concrete residence by Felipe Assadi Architects and a Le Corbusier-influenced retreat by Gubbins Arquitectos. 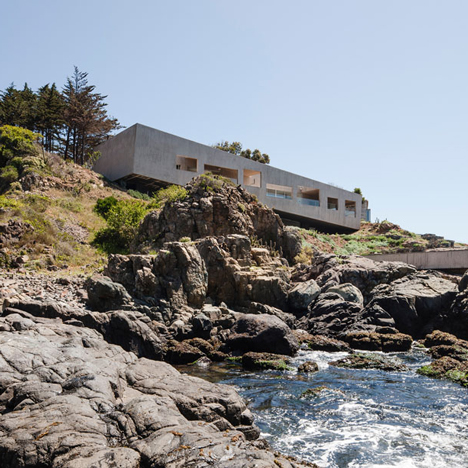