The silhouettes all feature a ribbed form, which Parmentier based on a building he had seen in Milan.

"The base of this huge 19th-century building had a stacked shape in beautiful beige stone," Parmentier told Dezeen. "I thought it would be interesting to have a line of furniture starting from this detail taken to another scale and material – leather."

Parmentier, who also serves as creative director of Giobagnara – a Genoa-based leather furniture and accessories brand, said that the challenge was getting the leather to adhere to the curved wooden surfaces without wrinkling.

He also wanted the pieces to be as light as possible, while still using wood for the supporting structure. 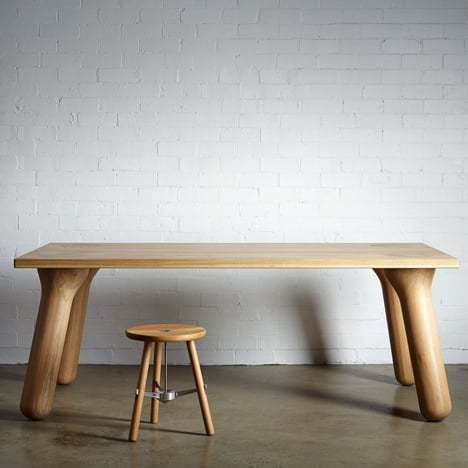 "We have to humidify the leather, stretch it and then glue it to the wooden base," explained Parmentier. "But on top of this it is the craftsman with his skills; only a few of them can meet this technical challenge. I like the idea of a furniture with an apparent simplicity but with lots of hand finishes."

"The other challenge was not to have a too heavy wooden base," he continued. "The inside of the furniture is very sophisticated."

Parmentier began his career at fashion label Karl Lagerfeld, before setting up his own architectural studio in 2002. As well as producing his own label's furniture collection, Parmentier's projects include interiors for Hermès and Christofle and furniture and lighting for brands such as Astec and CTO Lighting.

He said his work is inspired by "classical Greco-Roman antiquity, the beauty of the Puglian landscape, the restraint of the Japanese aesthetic, and a desire to focus on the essential".