Clerestory and dormer windows that face a nearby river intersect with a copper-clad roof, which wraps around onto the front and rear facades of this house in the Dutch city of IJsselstein.

EVA Architecten, which is based in nearby Utrecht, designed Villa IJsselzig for a site on the banks of the Hollandse IJssel river that gives the city its name.

The property's simple gabled form evokes the region's traditional houses, while a monochrome material palette and crisply detailed form mark it out as a modern addition.

"The house refers to the neighbouring homes in the original ribbon development in terms of form but has a contemporary character with minimal details and rich colours," said the architects.

The building uses materials in matching reddish-brown tones that are intended to lend it a consistent and homogenous aesthetic, as if the entire structure is carved from a single volume.

The facades are predominantly clad in a slimline red brick that introduces a traditional tone and texture. Windows with minimal modern frames are recessed into both gable ends.

The brick surfaces are juxtaposed against a roof formed of patinated copper panels fixed together with standing seams. The metal wraps over the off-centre ridge and extends down onto the top portion of the front and rear elevations.

The roof is intersected by dormer windows at the rear, which frame views towards the river. A row of clerestory windows at the front allow light to enter and prevent overlooking.

The entrance facade looks towards neighbouring properties and is therefore predominantly closed. A glazed entrance vestibule connects with a porch sheltered beneath an overhanging section of the roof.

In contrast, the more private rear facade incorporates large glazed surfaces that wrap around one corner and create a visual connection between the interior and the garden.

The interior developed in collaboration with fellow Dutch studio NEST features a timber core that incorporates functional elements including the staircase and storage.

The remaining space is largely open and flows through from the entrance to a double-height kitchen and dining area connected by a short set of steps to the living room. 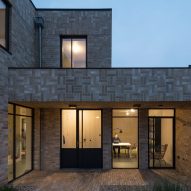 The stairs lead to an upper storey with bedrooms situated towards the rear so they look out towards the river. Bathrooms and utility areas positioned to the front of the building are illuminated from above by the clerestory windows.

The introduction of skylights to supplement the high-level windows ensures plenty of daylight reaches the living areas, which are overlooked by a bridge that connects the bedrooms on either side of the upper floor.