Austin Maynard Architects has completed a house in a suburb of Newcastle, New South Wales, featuring curved tubular-steel supports that prop up a first floor that faces out towards the ocean and the city's skyline.

The Melbourne-based studio designed Greenacres as a family home perched on a steeply sloping site in Newcastle's Merewether neighbourhood.

In their brief, the owners requested a house they could grow old in, and added that they would appreciate "a window with a view if possible." The proposed design provides views from throughout the house and garden.

The awkward hillside site was previously occupied by a dilapidated house that could not be saved and was therefore demolished to make way for a new building designed to take advantage of its desirable location.

The architects designed the property as a series of tiered volumes that follow the terrain and offer a variety of views, without negatively impacting the neighbours.

The garage is positioned at the base of the property, with a set of metal mesh steps connecting to a path that leads up and around the side of the building towards a main entrance at the centre of the house.

The stairs and paths are lined with plants that also extend across the roof of the garage, ensuring that the view back down the hillside is dominated by greenery.

The garage is the first in a sequence of brick-clad volumes that step back up the hill. The second block contains the bedrooms and a bathroom, with dedicated entrances onto the garden.

The surfaces of the robust, monolithic structures are given a characterful and aged texture by the masonry, which incorporates colourful graffiti-covered bricks.

Resting on top of the brick base is a white-steel volume, which is extruded outwards to create a container for a main living space that culminates in a light and permeable balcony. 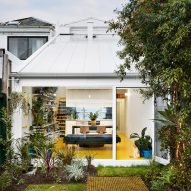 "Inspired by the macrobinoculars in Star Wars: The Empire Strikes Back, the white suspended living zone was designed to bring the views into focus, like a lens, framing the vista," said the architects.

Full-height sliding doors connect the open-plan kitchen, dining area and lounge with the balcony, which features a slatted balustrade and battened ceiling that align to draw the eye towards the view.

Where the white box projects beyond the brick volume below, it is held up by three steel supports described by the studio as "giant steel paperclips".

These minimal metal props enhance the lightweight feel of the structure and maintain views from the spaces below.

A corridor to the rear of the metal-clad box leads to the master bedroom, which occupies the other brick volumes and features a walk-in wardrobe, en-suite bathroom and private study.

The home's bright and contemporary spaces respond directly to the brief, as does the inclusion of a lift connecting the garage with the levels above, which ensures the house will remain fully accessible as its owners age.

One of the studio's founding partners, Andrew Maynard, previously renovated his Melbourne home to make it bright enough to improve his mental wellbeing, while the studio also used recycled bricks to build a house on top of a former garage in a Melbourne suburb.