Mexico City-based architect Rozana Montiel has completed a four-bedroom home in Tepoztlán, using local materials as a way to integrate the home into its natural setting.

The Albino Ortega House sits on a 460-square-metre plot full of vegetation in the town, which lies to the south of the capital within a valley of the same name. The single-family home was built from locally sourced stone, which forms external walls and is also left exposed in indoor-outdoor spaces.

"This house located in Tepoztlán has an artisanal base, made of Texcal stone, occupied by part of the house's programme," said Rozana Montiel Estudio de Arquitectura. "It changes from an outside hermetic facade to a great open space that integrates the garden's exuberant vegetation."

Access to the house is via a flight of narrow stone steps. Beyond the entrance, a partially covered courtyard with a pool at its centre creates an area for relaxing in the shade.

"Water is present both inside and outside the house, refreshing all spaces, filling them with air and sound," said the architecture firm.

Next to the courtyard is a guest bedroom, a den, and the live-in maid's quarters. Beyond the shallow pond, the kitchen runs along the north wall of the home, along with the dining table and a small seating area. 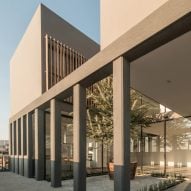 These spaces extend to the courtyard outside, which can be taken advantage of when the weather is warm. "The house intertwines interior and exterior all the way to the terrace and the great open garden," said the studio.

The upper floor only occupies part of the plan, leaving open an expansive rooftop terrace, from which the residents can peer into the entry court below.

Three bedrooms on this level each has have their own ensuite bathroom. Large doors in the master bedroom swing open towards views of the garden. The volume is clad in wood, to contrast the rest of the building.

Throughout the home, the architects chose simple furnishings with an emphasis on traditional Mexican craft, which the area of Tepoztlán is known for. These pieces, and other accents like slatted wooden doors, help tie together the project.

Many buildings in and around Mexico City are constructed using local materials and traditional techniques. Other examples include a home organised around two courtyards that was built using teak wood and mud bricks, and a house with a modernist aesthetic that incorporates volcanic stone. 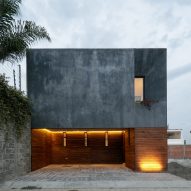