A slide and bright yellow ladder are among the playful interventions employed by Alter & Company in its modernisation of a farm in Surrey, England.

The cluster of structures that previously housed the farm's stables enclose a courtyard to the south of the historic half-timbered cottage, which is surrounded by scrub and woodlands.

The project sought to retain the existing scales and relationships between the buildings, while updating them and incorporating them into a unified scheme.

"We were delighted to be given the chance to work with this beautiful range of old buildings," said Alter & Company director, Leith McKenzie.

"As well as intermingling old and new, we were keen to cultivate a sensitive and playful approach to making a contemporary home for our clients and their young family."

The modernisation process involved preserving some of the buildings' original features, which were removed and restored before being reinserted into the reconfigured interiors.

By incorporating the farm buildings into the house, the architects sought to create a series of interconnected spaces with a dynamic relationship between indoors and outdoors.

The resulting configuration of rooms creates a sense of continuity between older and newer spaces with varying proportions, while several "sculptural landmarks" are used to enliven the journey through the building.

One of the key interventions is an angular glass volume that bridges the space between the main house and the outbuildings, while retaining the visual connection between the yards on either side.

"This reflective and transparent tunnel purposely stands out as a new piece of connective architecture," the architects added. "By its very nature, it implies a type of 'time travel' – from a rural historical past, to a new modern playful present and future." 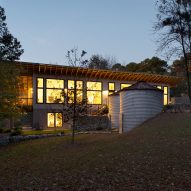 The glazed structure intersects with the wall of a traditional building featuring a gable end that was in-filled with glass to provide a view of the garden and allow daylight to flood into an open living area.

The living space contains a curving steel staircase set on a base made from oriented strand board. The stairs lead up to a bridge beneath the pitched ceiling that connects a small study at one end with the master bedroom at the other.

The ground-floor area is designed as an open, double-height entertainment space containing some of the restored original features, including brightly painted ironwork.

At the end of the living space, a corridor lined with weathered timber leads towards the children's bedroom and shared bathroom.

One side of the corridor contains large windows and doors that bring a vertical rhythm to the courtyard outside and allow natural light to illuminate the interior.

A yellow circular ladder extends from the corridor into a play area with a net fitted along its edge functioning instead of a balustrade and providing views down into the corridor.

A secret door leads from the playground to the master bedroom suite, which looks down onto the living areas and garden through a pair of angled windows.

Behind the bedrooms, a looping slide provides a speedy way to descend directly back down into the entertainment room.