Local architecture studio TRANS has rebuilt a factory in a residential neighbourhood of Ghent, with pitched roofs referencing nearby housing.

TRANS oversaw the project for local food packaging business Ryhove, which has been based in central Ghent, Belgium, since the 1980s.

After decades of ad-hoc expansion, Ryhove's facilities had become outdated and no longer provided the sort of workplace that was appropriate for a successful company.

Rather than moving and building a new facility on a suburban industrial estate, Ryhove chose to retain its current site so its employees could continue to work in their neighbourhood. 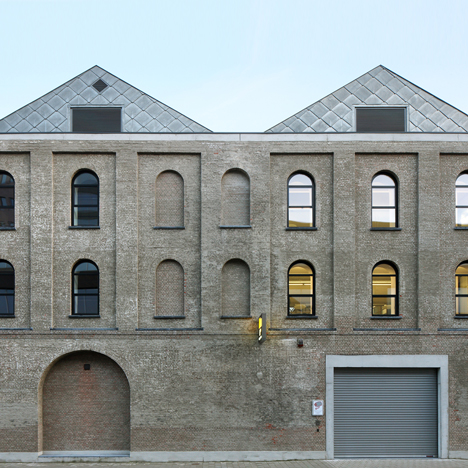 The new  factory's design seeks to complement its setting in an area predominantly containing terraced homes.

At the entrance to the loading area, a gabled form is repeated three times to create a roof over the first-floor office spaces, with space for vehicles to enter underneath.

The roof form references the traditional shape of the tiled roofs on the surrounding houses, but with corrugated metal  used to reflect the building's industrial use.

Its long, street-facing elevation is separated into bays with a width of five metres that approximately echo the proportions of its residential neighbours.

"An important ambition was to make the industrial expansion acceptable in a residential area," explained TRANS in a project statement. "That is why the 'terraced house typology' was chosen as a reference for the intervention."

The new building also reorganises the site around a central loading and unloading area, ensuring that the logistical operations, which are central to the organisation's work, are on display instead of being hidden away.

The building was constructed using standardised, prefabricated elements, including concrete columns and cross-laminated-timber panels that enhance its industrial character.

Trusses made from steel and wood support ceilings lined with timber that lend the interior a warm and comfortable feel.

TRANS is the latest architect to create an impressive looking factory. In 2017 Vitsœ opened a production facility in the UK with "intentionally unfinished" interiors,  while Atelier Ars corn factory in Mexico included a memorial garden.