Apple has launched a colourful new collection of straps for its smartwatches, including stripy and spotty designs.

Unveiled for the spring season, the range includes straps for the Apple Watch, Apple Watch Nike+ and Apple Watch Hermès, in a choice of materials that includes nylon, leather and rubber.

One of the most distinctive designs is the new striped nylon strap, which comes in a range of different colour sets, including black and grey; white and grey; white, blue and green; and white, pink, yellow and orange.

For customers buying the Apple Watch Nike+, which is tailored to sports enthusiasts, there is also be the option to purchase versions of the Sport Band and Sport Loop that match the latest Nike running shoes.

The Apple Watch first launched back in 2014, featuring a purely digital square face, interchangeable straps and a sapphire screen. At the time, Apple CEO Tim Cook said: "We set out to create the best watch in the world."

It got off to a shaky start, suffering criticism from designer including Yves Behar and Technology Will Save Us co-founder Bethany Koby, and then later from Apple co-founder Steven Wozniak. 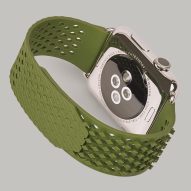 However sales are understood to be strong. In its latest financial results, Apple reported 70 per cent year-on-year growth in the "other" section of its products, which includes the Apple Watch, Apple TV, Beats headphones and iPod.

And last year, at the launch for the Apple Watch Series 3, Cox revealed that smartwatch usage had increased by 50 per cent since the launch of the previous version.