In April, Apple courted the design world by presenting the Apple Watch at a pavilion in Milan and holding a glamorous dinner for leading designers. So what do designers think of the product now – and why are so few of them wearing it? Dezeen investigates.

Our first problem was finding designers who have an Apple Watch. A callout on social media drew no responses and we haven't spotted any on wrists at recent design-industry gatherings.

"I don’t see it around much," said Yves Behar, founder of San Fransisco studio Fuseproject and designer of wearable devices including the Jawbone Up.

"I personally don't have one because I don't feel I need another screen in my life," Behar added. "I work a lot on products that integrate technology but I don't feel that the use case for most products that propose to you an additional screen is clearly defined."

"I decided not to get one," said Bethany Koby, co-founder and CEO of design-led tech studio Technology Will Save Us.

"I think as a family we wanted something to help us achieve balance in our obsession with phones, but looking at it closely it became apparent that it was just adding a new behaviour that could be just as bad as the behaviour of constantly checking your phone."

Koby added that the watch is "just replacing your phone, and I don't think that's what people are looking for in wearables quite frankly."

Back in April, Apple set up a temporary pavilion in Milan to present the product – the first time the brand has ever had a presence in the Italian city during the furniture fair. Apple also invited the cream of the design world to a dinner in Milan to show off the watch.

However, it appears the charm offensive has not yet convinced many designers to adopt the device. The product seems not to have become a must-have item like the iPhone quickly became after its launch in 2007.

Related content: see all of our stories about wearable technology

One designer who does own an Apple Watch is Clemens Weisshaar of Kram/Weisshaar. Dezeen emailed him after he posted a photo on Instagram of his new purchase.

"I am trying to make it through day three [of wearing the Apple Watch] as I write," he replied. "As exciting as Apple Watch is from a 20th-century industrial design point of view, it fails to excite after a couple of hours as a piece of 21st-century technology."

"Not because it's uninspired; the interface is neat," Weisshaar continued. "But once the 3D pixel cloud of the pairing screen has stopped spinning it becomes too flat. And it responds so slowly that using it is almost reminiscent of Windows 95."

"What is even worse is you can't take control of this new screen. Apple wont let you code your own clock face. I may start liking it once I can make it mine."

Bill Kingston of Den Creative, a London web design company that does a lot of work for Dezeen, also bought an Apple Watch recently and was wearing it in a recent Skype call with us.

"It's a bit underwhelming," Kingston said when we asked him about it. "I expected it to be more than it is. It's just a notification device. You can't actually do anything with it."

Kingston bought the watch because clients were starting to ask about developing apps for it, but he said: "I feel like I have to wear it because I bought it. It tells the time, otherwise I'd be struggling."

"A lot of people are waiting for the next one," he added. "Considering they've sold millions of them, they're barely around. I've not seen many others." 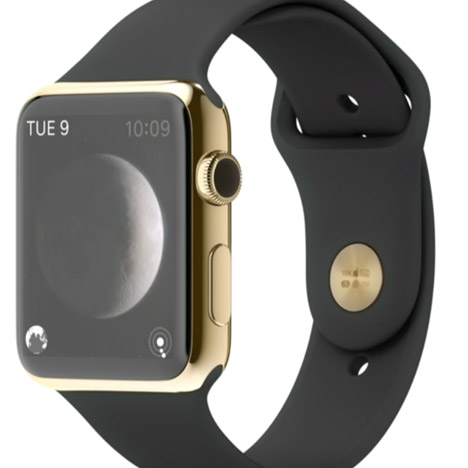 Designers react to the Apple Watch

A couple of weeks after that conversation Kingston emailed to say: "If you're still planning on writing a story about the Apple Watch, mine is now on eBay."

Apple spent years developing the watch, drafting in industrial designer Marc Newson – who has a lot of experience designing timepieces – to work with his longstanding friend and Apple chief design officer Jonathan Ive.

The product marked Apple's first move into wearable technology and the brand has billed it as a game changer.

"This product will redefine what people expect from this category," said Apple CEO Tim Cook when the watch was announced in September last year. "It is the next chapter in Apple's story."

Designers expressed mixed opinions on the gadget when it was first unveiled, with Michael Carr, design director at London watch brand Uniform Wares saying it is "clearly going to trigger a revolution in the way we interact with technology," while industrial designer Michael Young said: "The Apple Watch does not come close to what we are doing in China."

The product, which requires an iPhone to work, delivers notifications to the wearer and contains a range of apps that monitor activity and health.

Apple has not released sales figures for the product but estimates at the number of watches shipped since it went on sale in April range between 3 and 5 million – which makes it by far the best-selling smartwatch on the market.

Apple attempted to avoid the fate that befell Google Glass, which appealed to early adopters but few others and was pulled from sale earlier this year – by marketing it as a lifestyle accessory with a wide range of finish and strap options, and by targeting the fashion and design communities.

So far, however, designers seem unconvinced.

"I don't like the Apple Watch and I don't use one," said Gadi Amit, president and principal designer at San Francisco studio NewDealDesign. "I tried it a few times, pondering should I buy it out of professional reasons. I opted not to. The styling is too bland to my taste. It's just too round and innocuous to me, although I admire the straps' magnetic latching."

"I don't like shiny things on my wrist especially if they feel a bit weighty," added Amit, who has worked on a range of wearable devices including the FitBit activity tracker. "Every time I tried the watch, the UX/UI was confusing and a major turn-off."

"The one feature I like and may eventually get me on board is payment," he said, referring to the Apple Pay functionality of the watch. "This looks like a lovely experience to have, yet many merchants are not compatible yet."

Gadi Amit asked his team at NewDealDesign – some of whom own an Apple Watch and some of whom don't – for their impressions of the product. Here are their responses:

For a relatively new category it's a complicated product for people to understand and see what value, joy etc., it brings them. What does it do? The list goes on and on. There's not really a short answer.

What is the emotional value that people can relate to? Perhaps this is an Apple marketing and communications issue, but sending your heart beat doesn't feel like the right answer.

I use a Fitbit. It captures the useful functionality of a smartwatch with a value that is easy to grasp. Perhaps people will eventually "get it" but with this first Apple Watch, they just don't.

I won't put a screen on my wrist, period.

Apple Watch… why? Smartwatches overcomplicate a classic object with no real added value. I absolutely love my "dumb" watch!

Wearing smart technology on your wrist is a great idea! I would definitely buy a SmartWatch if someone come up with a technology that can eliminate the annoyance of notifications from my life, And charging-free technology, too! I'm counting on you, Apple!

The thought that a wearable can help ween me from obsessing over tech might seem counter intuitive. But one of the joys of wearing the Apple Watch is that I trust that I get "personal" nudges whenever I need to pay attention.

To interact with something that's on your wrist is much more convenient than reaching for your pocket. I foresee one day we might not have handheld phones anymore. With that said, this category still needs to grow a lot more. It needs to get to the speed and functionality of what smartphones offer, for more people to care – and not just be a 'cool' gadget.

First I'll say that I do appreciate the design of the Apple Watch, though I am suspect of the actual usability of the screen for some of the tasks it boasts. The modularity of the design is executed beautifully, and the options within the modular system are really nice.

I already own a Fitbit Surge, which gives me all the biometric tracking that the Apple Watch provides, as well as allowing me to view texts and incoming calls. While I don't have the ability to respond to tests or answer calls from my Fitbit, the idea of playing secret agent and speaking into my wrist utilising a talk-to-text app, isn't too appealing.

As an experience designer working in the industry I feel like I should own an Apple Watch, but I haven't bought one because the last thing I need is to be even more connected. I already check my phone all day, everyday – and it's on silent. Besides, I love the look and feel a classic watch. It's a great accessory and there are so many options to choose from.

I own an Apple Watch out of professional obligation and personal curiosity. It's an expensive iPhone accessory with about as much utility as one would expect from an expensive accessory. The most useful feature is to triage all of the activity that the phone generates, but quite frankly, as an accessory, that's pretty good.

It's managed to slowly wean me off of my clinical attachment to my phone. Unfortunately, it comes freighted with the incredible baggage that Apple bears with a new product in a new category from lovers, haters, and everyone in between.

As an Apple Watch user who has never owned a watch before, I got it for pure aesthetic value and interest – I wanted to see Apple's take on a smartwatch. I would say it is a different experience for me since I am not used to checking time from my wrist.

It is more of an extension of the iPhone than the watch – I merely use it to check messages, emails, and notifications. There still is a long way to go for Apple, but I am pretty sure it will improve over time.

From a strategic perspective, it's tough to justify why anyone should sacrifice a big chunk of their paycheck for something that has no clear promise. What does it really do for me that the phone I always carry does not?

Heartbeat vibrations, heritage crown controls and a visual minefield of app icons all points to an experimental product. And let's not neglect the number one strategic rule of screens – thinness rules. That watch's largeness catches and grabs at its surroundings.

More about Apple and the Apple Watch