Researchers at Forensic Architecture are investigating allegations that human rights organisations colluded with human traffickers to smuggle refugees across the Mediterranean, in the latest real-world intervention by the team.

The group, based at Goldsmiths university in London, is working to quash allegations that non-governmental organisations assisted smugglers ferrying refugees to Europe in boats.

"The burden of search and rescue operations has fallen quite heavily on NGOs and yet some of those NGOs have been accused for assisting smugglers," said Christina Varvia, an architect and researcher at Forensic Architecture.

The project is one of many cases the team is working on. Others include a neo-nazi murder, ethnic cleansing of the Yazidi people by ISIS in Iraq and a video reconstruction of the fatal Grenfell Tower fire in London.

Founded in 2010 by Israeli architect Eyal Weizman, Forensic Architecture is an investigative agency that works on behalf of NGOs. "We undertake spatial and media research on different conflict zones, on different violent events," Varvia explained.

"We do this kind of architectural analysis that we then compose as evidence for different legal and political forums, so we work with human rights organisations, with NGOs and with citizen-led groups."

The group's latest work with boat-borne migrants will produce evidence that will be presented to the European Court of Human Rights in an effort to prevent Europe introducing a "closed seas" policy that would forcibly deter migration across the Mediterranean.

Varvia spoke to Dezeen as an exhibition of the group's work opened at the Institute of Contemporary Art in London.

The exhibition, which runs until 6 May 2018, presents an overview of Forensic Architecture's projects around the world, showing how the team – including architects, photographers, film makers and programmers – takes on legal cases where spatial analysis could provide fresh evidence.

Included in the exhibition are details of two ongoing cases involving migrants. In both, Forensic Architecture is aiming to disprove claims that NGOs were colluding with smugglers.

Evidence to be presented at European Courts of Human Rights

Both cases will be presented at the European Courts of Human Rights later this year as evidence against creating "mare clausum", or a closed sea border.

"We work on projects that on one hand have political importances, and on the other hand there is some spatial question there – something we can answer on our own expertise," said Varvia. "If there is a question that can be answered through spacial analysis, then we will take it."

"The whole idea is to re-engage with what evidence means, how the truth can be argued from a counter perspective, not a government perspective."

As part of its investigation, the team analysed an incident involving German NGO Jugend Rettet. The charity, which rescues migrants making the hazardous crossing from Africa to Europe, had its rescue boat Iuventa seized by Italian coastguards in August 2017.

The coastguard suspected the charity of "aiding and abetting illegal immigration". It released video of the Iuventa sailing close to a smuggler's vessel and claimed a dinghy from the Iuventa had towed the refugee boat back to Libyan waters so it could be reused by smugglers.

Forensic Architecture carried out spatial analysis, using video to recreate the scene of a group of migrants crossing the Mediterranean, to demonstrate that the proximity of the smuggler's vessels was in line with the NGO's standard operating procedures.

By examining the wave formations in conjunction with the weather conditions on the day, Forensic Architecture's investigation of the photograph aims to demonstrate that the boat was not being towed back to Libya.

Forensic Architecture believes it can demonstrate the action taken by the NGO is again inline with standard operating procedures, which are to destroy the vessels or remove them from the scene if this is not possible.

Through analysing video taken at the scene and audio between the vessels and a french warship, Forensic Architecture aims to verify that Sea Watch was acting appropriately. The practice is trying to build a case to demonstrate that the Libyan coast guard's main aim was to take back people to Libya.

"They're trying to make the border of the Aegean, the Mediterranean, a kind of rigid border that nobody passes through, instead of allowing for open access mobility and considering the necessary assistance of asylum seekers in the European Union," said Varvia.

"What we hope to see through these cases is an open discussion about those policies and basically a change of policy which at the moment is leading towards 'closed sea'," she continued. "We are looking at the specificity of the instances because through that moment we can see all of those policies crystalise. They're exemplary cases of how those policies go wrong, of how they play out in real world conditions."

"This is often the way that we work, starting from the specific incident analysis, and we try to draw out from that to figure out how all of those larger scale decisions and political decisions are basically playing out in that moment."

For each case Forensic Architecture has a mission to develop a new methodology or tool that supports its work as a research body.

It also runs a Masters in Forensic Architecture at Goldsmiths, and is overseeing a series of short courses in conjunction with the ICA exhibition to disseminate the tools it has developed to the public.

"What we are designing are the tools of investigation and that's quite exciting," Varvia said. "It requires you to think outside the box. That's when it’s really fruitful, that’s the only way that we can investigate these cases."

"[We're] shifting the forensic case from something that is primarily undertaken by the government to something that we call 'counter forensics' – a way that citizen groups can engage with different rules of investigating state crimes," she added.

"So when it is the government that are the ones undertaking violent events, we would have to find ways of monitoring those government crimes from that perspective."

The group uses a range of techniques to reconstruct crime scenes, ranging from physical and digital modelling, geolocation, video and satellite imagery to motion tracking, and synchronisation of video from multiple sources to understand a scene.

They also use models as a way to interview victims and extract testimony. In one project, called Saydnaya: Inside a Syrian Torture Prison, the group used eye- and ear-witness accounts of survivors to digitally reconstruct a detention centre for political prisoners outside Damascus.

Forensic Architecture's research has also fed into other groups including Bellingcat – an investigative website set up by British journalist Eliot Higgins – and a unit established by the journalist Malachy Browne at the New York Times.

Browne has used some of the methodologies established by the group for investigative articles, for instance using video footage to piece together how Las Vegas gunman Stephen Paddock planned the mass shooting that killed 58 in October 2017. 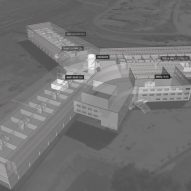 "Another group that has just been established at the New York Times is being led by Malachy Browne – someone who came to Forensic Architecture and was inspired by our techniques and set up a forensic unit in the New York Times – and they did work such as the coverage of the Las Vegas shootings," explained Varvia. "They started basically using some of the techniques that we are using."

Varvia believes more media organisations should develop similar units as a way of questioning material presented through official outlets. "I think it's necessary," she said. "It's a natural way to move forward in cross examining evidence when you have such a plethora of materials and information coming from so many different sources."