Forensic Architecture has created an interactive model of a notorious torture prison in Syria, using the eye- and ear-witness accounts of survivors (+ movie).

Forensic Architecture, a research group based at Goldsmiths University in London, produced the interactive model of the prison for the human rights organisation Amnesty International.

The project, named Saydnaya: Inside a Syrian Torture Prison, aims to show conditions inside Saydnaya, a detention centre for political prisoners that is located 15 miles north of Damascus.

The prison – described by Amnesty as an "architectural instrument of torture" – is said to carry out the brutal torture of Syrians suspected of opposing the government regime led by president Bashar al-Assad.

Syria has been at civil war since conflict between government and rebel forces broke out in March 2011.

Outsider entrance to the prison is severely restricted, so the digital model is based on the testimonies of survivors.

"In recent years, no visits from independent journalists or monitoring groups that report publicly have been permitted to the prison," explained Forensic Architecture's principal investigator Eyal Weizman.

"As there are no recent photographs of its interior spaces, the memories of Saydnaya survivors are the only resource with which to recreate the spaces, conditions of incarceration and incidents that take place inside," added Weizman. 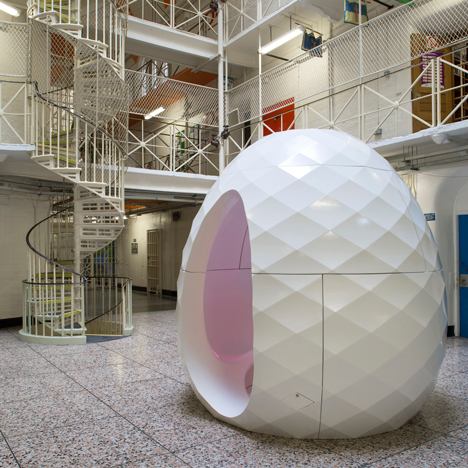 Survivors now seeking refuge in Turkey shared their experiences with a team of researchers from Amnesty International and Forensic Architecture earlier this year.

Their evidence was used to create the interactive model of the prison's architecture, which is hosted on the Amnesty International website.

The building, and some of the events that took place inside, are shown through 360-degree renderings, short videos, audio and written descriptions.

Former detainees gave accounts of their cells, the stairwells, corridors and gates they used to Arabic-speaking architect Hania Jamal, who constructed computer models of the spaces.

Accounts of the spaces were often distorted as a result of the psychological and physical abuse afflicted inside the prison.

"Memories of violence are rarely straightforward records that are orderly stored and can be easily retrieved," said Weizman.

"Each witness had blanked out different parts of the building. Some of them described certain spaces as being much larger, corridors as longer, staircases as higher; and the building as having more floors then we knew it to have."

Lack of natural light within the building, and the blindfolding of prisoners, means that many of the architectural details are also based on sound.

"Echo and reverberation modelling helped confirm the size of spaces such as cells, stairwells and corridors as well as to reconstruct some incidents within them," said Weizman.

"Some detainees saw only the floor tiles through a thin sliver under sacks pulled over their heads or had noticed only the contrast between darkness and light as they were moved past windows," they added. "As a result, prisoners became attuned to the most minute of sounds."

Tens of thousands of Syrians suspected of opposing the Assad government's regime have disappeared since the beginning of the country's crisis in 2011.

They are suspected of being held in a secret network of government-run prisons and detention centres including Saydnaya.

"The Syrian government does not always provide information about prisoners' whereabouts and often denies that detainees have ever been arrested," said Weizman. "People are simply 'disappeared', killed or die in secret."

"During our work towards understanding something of the experiences endured in Saydnaya we realised that the building functions not only as a space where incarceration, surveillance and torture regularly take place, but that it is, itself, an architectural instrument of torture."