Arup and CLS Architetti are creating the structure, which they describe as "Europe's first 3D-printed one-bedroom house", to highlight the potential of the technology.

It is currently being 3D printed at Piazza Cesare Beccaria, to be showcased during the annual design week in April. After that, it will be demounted and relocated elsewhere.

"We want 3D printing to be taken more seriously," explained Guglielmo Carra, who is Arup's materials consulting lead for Europe.

Named 3D Housing 05, the single-storey 100-square-metre home, will contain four rooms: a living space, a bedroom, a kitchen and a bathroom.

It is being printed by a robot made by Cybe Construction, using concrete supplied by cement supplier Italcementi, which is specifically being mixed to cure quickly. This will allow the 3D-printing process to continue quickly.

"The peculiarity of the concrete mix is to be made so that the curing time is much faster than in traditional cases, so as to allow the bottom layers of any printed part to withstand the load created by top layers," said Carra.

Following Milan design week, the 3D-printed house will be dismantled and reassembled at a location on the outskirts of the city. Here the team will conduct a series of non-destructive tests to monitor how the 3D-printed structure will perform over time. 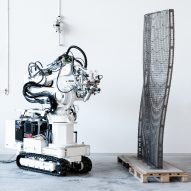 The rise of 3D printing over the past decade led to numerous architects and designers trying to become the first to build a 3D-printed house. Others have been completed in China and Russia, plus a micro home has been 3D printed in Amsterdam.

But Arup and CLS Architetti think theirs will bring something new to the table.

"With this project we wanted to demonstrate that 3D printing is yet a reality from a technical and technological standpoint," said Carra.

"With the advancement of robot development, by using flexible manipulators, we believe that 3D printed building could increase even more in dimensions and in speed of execution."

The house will not be the only 3D-printed design at this year's Milan design week. The first collection from Spanish brand Nagami, which will debut at Milan, will feature 3D-printed chairs designed by Zaha Hadid Architects, Ross Lovegrove and Daniel Widrig.