Architecture firm OMA has revealed the design of its first cultural building in California: a pavilion featuring tilted walls and patterned openings that will accompany a Jewish temple in Los Angeles.

OMA's Audrey Irmas Pavilion will provide a series of multi-functional gathering spaces alongside the Wilshire Boulevard Temple – home to one of the largest Jewish congregations in the city.

The firm won a competition in 2015 to build the pavilion for the Erika J Glazer Family Campus, which comprises the temple, and early-learning centre, an elementary school and a religious school, and spans an entire city block in the Wilshire Center district. The commission marks OMA's first from a religious institution, and for a cultural building in California. 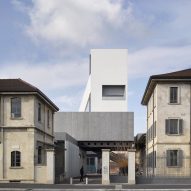 Designed by OMA partner Shohei Shigematsu and his New York-based team, the Audrey Irmas Pavilion will feature angled walls so that it tilts away from the adjacent Wilshire Boulevard Temple.

The existing building was completed in 1929 and provides an example of Byzantine Revival architecture style, with key features including its dome-shaped roof.

"We wanted to focus on communicating the energy of gathering and exchange," said Shigematsu. "The pavilion is an active gesture, shaped by respectful moves away from the surrounding historic buildings, reaching out onto Wilshire Boulevard to create a new presence."

A new rendering released of the design reveals that rectangular windows puncturing the walls will be rotated in different directions and framed by hexagonal markings – a decorative detail that alludes to interior murals of the existing building.

There are two large openings: an arched doorway facing the street and a terrace on the western wall. A third smaller glazed opening, also located on this wall, appears to form a second entrance from a courtyard slotted between the old and new buildings.

Inside, OMA has included three different gathering spaces: a main event space, a smaller multi-purpose room and a sunken garden. The firm says that the trio will be "stacked one atop another to establish vantage points and framed views in and out". 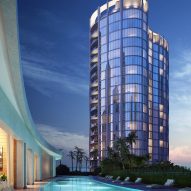 "Within the building, a series of interconnected meeting spaces at multiple scales provide ultimate flexibility for assembly, while maintaining visual connections that establish outdoor-indoor porosity and moments of surprise encounters," added Shigematsu.

The structure, named after lead donor Audrey Irmas, is slated to break ground later this year and open in 2020.

OMA was founded by architect Rem Koolhaas in 1975, and both he and the firm placed at number 16 in the 2017 Dezeen Hot List of the world's most newsworthy forces in design. The studio recently added another building to its Fondazione Prada complex in Milan