Japanese practice Hibinosekkei has completed a nursery in Yokohama, which features plywood-lined interiors and house-shaped openings set into its dark facades.

MK-S Nursery was designed by local architecture office Hibinosekkei to accommodate a classroom for pre-school children and an after-school childcare centre within a former residential building.

The project was overseen by the studio's dedicated childcare division, Youji no Shiro, which has designed more than 500 children's facilities including a kindergarten with a built-in obstacle course, and one with a small wooden playhouse inside.

The nursery in Yokohama is housed in a building that previously contained a residence and shop. The two-storey structure is located close to the main kindergarten facility and functions as a satellite base for the children.

The 40-year-old building had become dilapidated but its exterior was retained as part of a refurbishment that has altered the interior to incorporate two childcare rooms on each level.

New cladding that wraps around the existing exterior helps to update the aesthetic of the dated building. The metal surface is perforated with a pattern that evokes the constellations of a galaxy.

The dark cladding is interrupted by playful windows that echo the gabled forms of typical dwellings found throughout this residential neighbourhood.

"By setting distinctive windows, passers-by can see inside and it makes it possible that people get to know the curriculum of this building's programme," said the architects. "It also gives brightness to the inside and a close relationship to the outside." 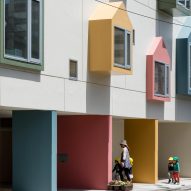 The nursery is entered via a covered walkway facing onto a carpark at the rear of the site. A pair of entrances lead directly into the childcare rooms on the ground floor, while two more entrances connect with stairwells ascending to the first-floor rooms.

The interiors are all lined with plywood boards that lend the spaces a utilitarian yet warm aesthetic. Each room features house-shaped openings alongside operable square windows that can be used to provide natural ventilation.

Photography is by Kenjiro Yoshimi/Studio Bauhaus.