The Danish inventor on trial for committing murder aboard his self-built submarine helped Bjarke Ingels Group develop the distinctive smoke-ring-blowing chimney of its Copenhagen power plant, Dezeen has learned.

Peter Madsen, who is charged with the murder of Swedish journalist Kim Wall, is credited with helping Danish architecture studio BIG develop the technology for the chimney.

He features in a video testing a prototype in 2015 and is also cited in the 2015 Kickstarter project that raised funds to realise the chimney.

"Based on an original art proposal by the Berlin-based artists realities:united, we are designing the chimney to utilise the plant's excess steam in collaboration with Peter Madsen's Rumlaboratorium, as well as the Danish Technical University," reads the Kickstarter campaign.

The plant will generate electricity and heat from rubbish when it opens later this year.

The Kickstarter funding initiative described the facility as "the world's cleanest power plant" and called on backers to "help BIG turn fiction into fact by transforming the smokestack, a symbol of the industrial era, into a communicator for the future".

"In the future, if you come to Copenhagen, all you will have to do is look at the Copenhagen sky and count the rings," reads the campaign statement. "Each one will signify the emission of a single ton of CO2."

At the time, Madsen headed up the innovation company Rocket Madsen Space Lab (RML Spacelab), the website of which has now been taken offline. He previously worked at Copenhagen Suborbitals, which he left in 2014.

Excess steam produced by the power plant will be released in ring-shaped formations from the chimney by using an elastic mechanism. 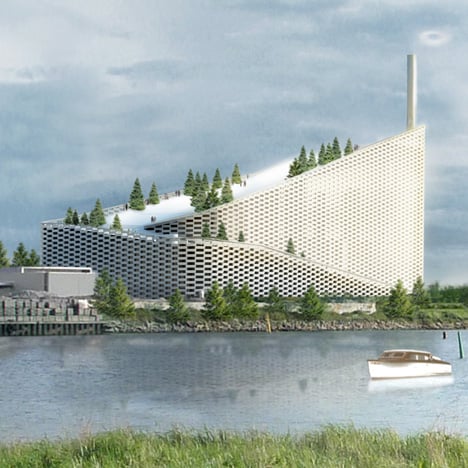 Each ring is intended to represent one ton of carbon dioxide emissions as a reminder of the city's energy consumption.

Initial designs for the Amager Resource Centre power plant, which will also have a ski slope on its roof, were first revealed in 2011.

However BIG said Madsen's involvement in the project was limited. "We'd prefer not to comment on P Madsen," a spokesperson for BIG told Dezeen. "He did some welding work on a prototype and that's about it."

Wall was last seen boarding Madsen's submarine named Nautilus in Copenhagen on 10 August 2017 to conduct an interview about the design. Her torso was discovered washed ashore on 23 August. Madsen has admitted dismembering Wall's body but denies her murder, claiming she died in an accident on board the vessel.

The trial continues at Copenhagen City Court until 25 April 2018.