The Warehouse Hotel in Singapore was designed to create a unique local experience, says Chris Lee of design firm Asylum, in this movie Dezeen filmed for the AHEAD Asia 2018 awards.

Local design firms Asylum and Zarch Collaboratives, converted a 19th-century former spice warehouse on the Singapore River into the boutique hotel. The property was named Hotel of the Year at the recent AHEAD Asia 2018 hospitality awards in Singapore.

According to Asylum founder Lee, the design aims to draw on the history of the site to create an authentic experience for guests.

"When people travel, when they stay in hotels, they want the stories to be authentic," he says in the movie, which Dezeen filmed in Singapore.

"We wanted the experience to be distinctly local. So if you’re a citizen of the world and you want to experience Singapore and some of its culture, this is the perfect place for it."

Occupying a trio of gabled buildings on the banks of the river, the hotel retains many original industrial features, including a large existing brick wall and the original exposed roof trusses.

"When we took over it was really dilapidated, there were bats and holes in the roof," Lee recalls. "The first thing that we wanted to do was to keep the integrity of the warehouse, it was important that we kept most of the things that you could recognise as a warehouse."

The central space of the hotel is a large open-plan lobby, bar and lounge on the ground floor, which features clusters of pendant lights hanging from black wheels among the ceiling trusses.

"When we came into the lobby, we wanted to keep the void and the space," Lee says."It was an important feature for us to feel the airiness. So we designed all these lights that were inspired by pulleys, which I think adds to that feeling of height in the space." 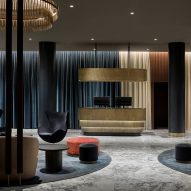 Asylum used plants and furniture upholstered in brown leather to soften the industrial finishes of exposed brick and concrete on the floors and walls.

"We had to balance the cold and grey warehouse with really warm textures that make it really comfortable," Lee explains. "At the end of the day we want people to feel very comfortable."

The bedrooms on the first floor feature a similar material palette, but Lee says each one is slightly different.

"Because of the three pitched roofs, all the rooms have amazing ceilings and they’re all quite different because of the way the ceiling has been constructed," he explains.

The rooms feature a range of bespoke objects made by local designers.

This movie was filmed at The Warehouse Hotel in Singapore for the AHEAD Awards. All photography is courtesy of Asylum.