The designs are described by Japanese brand Maruni as "comfortable chairs that express the different approaches of each designer".

Fukasawa, who also serves as Maruni's art director, will debut an armchair with a backrest, arms and seat made from a single piece of laminated plywood.

Named Roundish after its fluid shape, the chair's plywood seat has been twisted and bent in three dimensions to create an enveloping form.

"This chair is like a single swath of thin board that has been wrapped around and connected," explained Fukasawa. "When sitting, it feels nice and comfortable like one's body is being snugly enwrapped. It can provide a gentle and relaxing time whether using as a lounge chair or a dining chair."

Meanwhile, Morrison, who has worked with Maruni since 2011, has created a chair called Fugu. Made from solid oak and also available with arms, the Fugu chair's gently curved seat and backrest are made using Maruni's precision cutting technology.

"My intention was to design a wooden chair so comfortable that it wouldn't need upholstery," said Morrison.

In celebration of the brand's 90th anniversary, which falls this year, the new chairs by Fukasawa and Morrison will be debuted alongside special limited edition versions of existing chairs. 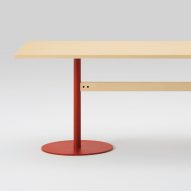 The limited edition Hiroshima armchair features a plain beech frame teamed with deep blue-green velvet upholstery. The fabric was originally developed following a trip to the fabric production region in Wakayama Prefecture in the 1960s and is still used today to upholster many of Maruni's chairs.

"This beautiful velvet with its long history, combined with the Hiroshima chair that was born ten years ago as a symbol of the new Maruni Wood Industry, is not only beautiful but also expresses our attitude towards craftsmanship," said the brand.

The limited edition T&O chair is made from ash – unlike the original design which is maple – with the distinctive S-shaped strip of steel that connects the seat and back finished in a powder coated silver lacquer.

In addition, a bar stool and table will be added to the T&O family while the Hiroshima armchair and high stool will be launched in a new grey finish.

Maruni's collection will be on show at Stand D49, Hall 16, at the Salone del Mobile fair during Milan design week – taking place this year from 17 to 22 April 2018.