The kitchen was installed following Stine Goya's move to a new office and showroom space, which is set within a listed property near Copenhagen's royal palace.

Throughout the building's renovation the designer stressed the importance of having a communal area where staff members could gather and relax, hoping that the kitchen would act as the social hub of the workspace.

Goya discovered a kitchen that local designer Christina Meyer Bengtsson had made in collaboration with Reform, which specialises in the customisation of IKEA's Metod kitchen cupboards.

Released back in the autumn of 2017, Bengtsson's design originally featured a mixture of grey, mauve, and brass cabinets. Attracted to the metallic detailing, Goya approached Reform to see if it could produce a kitchen made entirely of shiny brass to match the bright palette of her clothing collections. 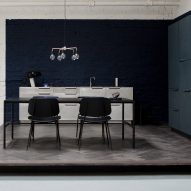 "Colour is important to me, both in my work and surroundings, so we decided to transfer it to the kitchen, which is a room often overlooked in an office context," Stine Goya told Dezeen.

The resulting kitchen has brass cupboards, side panels and handles, and a contrasting black laminate countertop.

Surrounding walls have been painted a shade of butter-yellow and paired with warm timber flooring to amplify the golden tones of the cabinetry. The adjacent corridor has been completed in a shade of plum, in keeping with the rich colour palette.

To make the kitchen appear more welcoming the fashion designer decided to dress the space with a selection of personal belongings, including floral-patterned vases and a portrait by artist Cathrine Rabem Davidsen.

"One of my favorite decorative objects used for the kitchen is the glass plate, that I found at Salone del Mobile, a place I visit every year for inspiration. The artwork in the kitchen is all by friends of mine," Goya added.

Last year Reform also teamed up with Stockholm-based studios Note Design and Afteroom to create IKEA kitchen hacks, both of which took cues from the pared-back aesthetic of Scandinavia.