The launch collection evokes styles from the early 20th century and is influenced by interiors seen by Vissers and his wife, Suzy, while travelling.

"We believe we come with a new design concept but obviously it's very clearly influenced by things from the past," said Vissers. "It is a modern design company but we look back and we get inspired by the beautiful shapes, concepts and atmospheres of the past."

"People wants some colour and warmness around them," he added. "We believe that the world needs a bit of calmness."

"It's based on 15 years of travelling and inspirations from a lot of places," said Suzy Vissers, who is co-founder and co-creative director of Revised. "The craft you could say British and Italian with a slightly Japanese influence."

Products are named after English villages such as Thakeham, Edburton and Ovington, while the material palette includes walnut, oak and marble. Traditional forms such as bent wood and tambour doors feature heavily and there is barely a straight line to be seen anywhere in the collection, with pieces featuring rounded corners and edges. 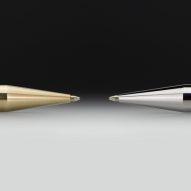 Casper Vissers added: "We printed out photographs we've taken of pieces of furniture we've seen in 35 different countries. We never went to designer hotels; we always went to more traditional ones because we love the furniture."

However, the products utilise advanced manufacturing techniques that allow complex forms to be machined at far lower costs than hand-crafted items.

"If we had tried to do this six years ago it would have been five times the price because it would all have to be made by hand," Vissers told Dezeen.

"People love those products and shapes from the 1920s but they are not on the market because they became too expensive to make," he said, suggesting that a minimalist design language is often used to mask cheap production values.

"Minimalism is valuable and very beautiful if the right materials and designs are adopted," Vissers said. "What disturbs us are brands who manufacture 90-degree corners made in the far east for economic reasons only and then are communicated as an exclusive, modernist must-have for your home."

Instead, Revised uses machines such as multi-axis CNC robots to fabricate its products, allowing the forming of complex wooden forms such as chair legs with asymmetrical sections that could only otherwise be produced by hand.

The products are manufactured in factories across Europe, with suppliers based in Germany, Italy, the Netherlands and Lithuania.

"It's on purpose," said Vissers. "Perhaps we could get it made cheaper further away but we have to start driving electric cars, we need to eat less meat and we should not ship from one end of the world to the other." 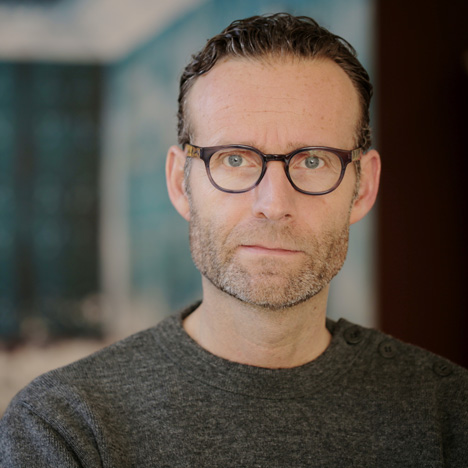 Revised marks a dramatic change of style for Vissers, who together with designer Marcel Wanders built Moooi into a global brand with a reputation for showpiece products in an eclectic mix of styles by a wide range of contemporary designers.

Vissers, 50, stepped down from Moooi three years ago having spent 14 years at the company. Last year the entrepreneur became a shareholder in British design brand Minimalux – but Revised marks his return to the design world on his own terms.

Revised will open for business from a showroom in Rotterdam and a curated network of distributors around Europe, plus an online sales infrastructure. The launch has been timed to come just before Milan design week, but the brand will not exhibit in the Italian city this year.

Revised's collection of 44 furniture and lighting pieces were all designed by Sjoerd Vroonland, a thirty-three-year-old Dutch designer.

Vissers first met Vroonland seven years ago, when the young designer presented his Revised Craft series of furniture designs that reinterpreted pieces from the 19th and 2oth centuries. Later his Extension Chair, a variant on a traditional turned-wood seat with an extrusion for holding coast, became part of the Moooi collection.

Vissers asked Vroonland to collaborate on designs for Revised but the designer came back with so many ideas that he ended up designing the entire collection.

"He understood the concept, so the soul of us all working together was born from that moment," Vissers said. "It's impossible to say that there will be only one designer for the rest of Revised’s life but first the first collection, it is a great team."