The London-based architecture practice has secured the contract to redevelop the airport near Novy Urengoy, in north-west Siberia.

According to the practice pointed roofs and vaulted interiors will echo the shape of the traditional tent, called a chum, used by the Uralic reindeer herders of the region.

"Like our other airport projects in Russia, the design of the building is heavily influenced by local conditions and culture, drawing inspiration from the huge variety found within the country," said Twelve Architects co-founder Matt Cartwright.

The tented elements will project from the facades of both the main terminal and a secondary building, which will hold baggage handling facilities. Inside, renders show panelled faceted ceilings supported by angled pillars.

Twelve Architects also designed a geometric facade for a new facility for The University of Sheffield's Faculty of Engineering in the UK, aptly named the Diamond Building.

Situated next to one of the world's largest gas fields, Novy Urengoy Airport airport will serve the regional oil and gas industry along with the city. The Yamalo-Nenets Autonomous Okrug region, where Novy Urengoy is located, is where 90 per cent of Russias natural gas is produced. 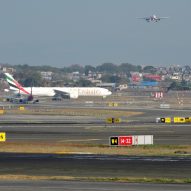 Airports of the Regions, which is a part of Russian private business conglomeration the Renova Group, agreed the plans to redevelop the site with the regional government.

"We are delighted that the investment agreement has been signed and we can move forward into delivering this project," added Cartwright.

Due to complete in 2021, the redevelopment is part of a larger ongoing project to regenerate Russia's airport infrastructure.

Twelve Architects have recently completed the Platov Airport in Rostov-on-Don ahead of the 2018 FIFA World Cup, when games will be hosted in the city.