Haptic and Nordic Office of Architecture have released plans for a city next to Oslo Airport that is to be completely powered by self-produced energy and served by driverless electric vehicles.

The practices are masterplanning Oslo Airport City (OAC) for a 370-hectare site beside the airport – which was recently extended by Nordic Office of Architecture. The aim is for OAC to be the "first energy positive airport city".

"This is a unique opportunity to design a new city from scratch," said Tomas Stokke, director of Haptic.

"Using robust city planning strategies such as walkability, appropriate densities, active frontages and a car-free city centre, combined with the latest developments in technology, we will be able to create a green, sustainable city of the future."

The new city will run on only the renewable energy it produces, selling the excess electricity to nearby cities or using it to de-ice planes.

OAC will only have electric vehicles, and the architects have promised that its citizens "will never be more than five minutes away from public transport".

Green technology will be used to keep the city's carbon emissions as low as possible, including driverless cars, auto-lighting for the streets and buildings, and smart-tech waste and security management.

Centred around a public park, the sustainable city will "cater to Norway's passion" for sports and outdoor leisure activities.

Renders show a large indoor swimming pool with views of the city and of planes taking off from the runways beyond.

A cycling route is depicted encircling a large lake populated by boats and paddler boarders, and geometric multi-storey climbing walls are shown placed on opposing banks.

Oslo Airport's workforce is predicted to almost double from 22,000 employees to 40,000 by 2050. Along with workers and their families, OAC will provide homes for a community of long-term residents, along with short-stay visitors passing through the transport hub.

Construction on the first stage of the city is expected to begin in late 2019, with the first buildings completed by 2022.

"As long-term city developers with focus on sustainable, innovative solutions, we believe the future of airport city development in Norway and Oslo is not a matter of if, but when," said Thor Thoeneie, managing director of OAC.

Oslo-based Nordic Office of Architecture designed the original airport in the 1990s, before completing the curving extension last year, doubling the airport's size and expanding its capacity to 35 million passengers a year.

The practice, which also has offices in Copenhagen and London, is currently delivering a new six-runway airport in Istanbul. Due to complete in 2020, it will be "the largest airport in the world". 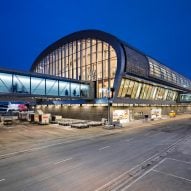 Nordic doubles the size of Oslo Airport with curved extension

Haptic and Nordic Office of Architecture are also collaborating on the project to deliver a new headquarters for the Norwegian government in Oslo. Their winning design was picked last year, after a competition was held to redesign the area following a terrorist attack in 2011.

Oslo's new aquarium, which will be built on the site of the former city airport, is to be designed by Haptic. Inspired by local rock formations, the aquarium's domed roof will appear to rise out of the sea.