New photographs and a movie reveal Zaha Hadid's only completed private residence – a house in the Barvikha Forest near Moscow, for a man she called the "Russian James Bond".

The house's defining feature is a master suite set atop a slender concrete stalk that raises it high above the tree canopy.

Set 22 metres above the ground, this element of the design offers Doronin complete seclusion. Glazed walls, tucked back from the edge of the floor to create two balconies, afford views out over the tree tops.

A stripe of gridded glazing runs the length of the suite's supporting column, which houses a glass lift and staircase that allows Doronin to enjoy the view on his ascent and descent.

"I told her: 'I want to wake up in the morning and I want to just see blue sky. I don't want to see any neighbors and I want to feel free," recalls Doronin in a new video discussing the project.

"She told me: 'Do you realise you have to be above the trees?' and she just took a napkin and drew the sketch. I looked and I said I liked [it] and this is how we started [the] Capital Hill project."

The lowest level contains leisure facilities, while a lounge, living room and kitchen are set alongside entertaining spaces and a swimming pool on the ground floor. The entrance, guest and children's bedrooms, and a library are set across the first floor.

The concept for the project was first conceived over a decade ago, when the pair met in London and Hadid sketched a design out on a napkin.

Visuals of the project were first unveiled in 2008 and initial photographs of the project emerged in 2011, well ahead of Hadid's death. But these images mark the full completion of the residence.

"For me she is an architect of a different league," says Doronin.

Hadid's former business partner Patrik Schumacher, who took over the helm of the company following her death in 2016, describes the project as a dream commission. 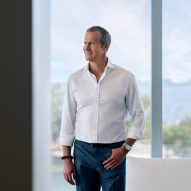 "It's a dream house. No architect would refuse such a commission," he says in the video. "Zaha knew Vladislav – a very stylish man – she always compared him to the Russian James Bond who had taste, wealth to create something extraordinary."

"This project is an absolute testament to Zaha's genius – Vladislav's genius if you like – of somebody who develops new levels of enjoying life on this planet," he continues.

"This is a masterpiece. It has Zaha's signature features of organic intricacy, complexity of spatial arrangement, a lot of surprises, and a lot of craftiness and beauty."

Foster recalls Doronin proudly showing photographs of his completed home at a dinner party, and feeling "tremendous disappointment" that he would never be able to share the compliment with Hadid.

Images are courtesy of OKO Group.