Architects Guilherme Pianca and Gabriel Kogan toured São Paulo's quaint restaurants dating back to the 1950s to find references for a sandwich shop in the city's institute for architects.

Pianca's firm and Kogan – the son of Brazilian architect and Studio MK27 founder, Marcio Kogan – designed the IAB restaurant to occupy the ground floor of the São Paulo department of the Institute of Architects of Brazil (Instituto de Arquitetos do Brasil, IAB-SP), which was built in 1950.

The locally based duo wanted the 220-square-metre space to complement the aesthetic of the modernist headquarters, and the surrounding mid-20th-century buildings.

While exploring the city's 1950s restaurants, Pianca and Kogan picked up a material palette that included wood, and yellow and beige shades, which they reinterpreted for the deli's decor.

Bamboo panels line the walls of the restaurant, also known as Z Deli, and offer a brighter alternative to the darker wood coverings found in the older eateries. Clashing with these paler tones are the deli's orange leather bar stools and chairs, which are custom-designed to look like office chairs in the 1950s.

The architects named the seats after French architect and designer Charlotte Perriand, who created modernist furniture.

"We tried to understand how different materials were applied in these architectures, bringing them in a subtle manner to our project – which does not mean to create an emulation of the surroundings, but to respect and precisely insert the restaurant in its context," said the team. 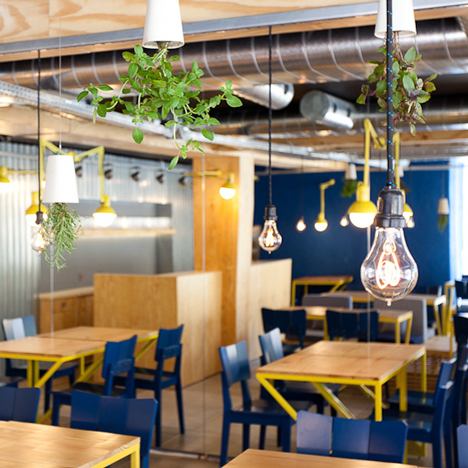 "We imagined an atmosphere that could refer to these restaurants that are elegantly working in the same place and in the same way for the last decades – food 'institutions' of the city – such as Almanara, La Cassarole, Churrasqueto, Itamarati, Casa Godinho, among many others," they added.

Other details take cues from the exterior of mid-century buildings that surround the IAB-SP. The marble and golden granite countertops reference nearby stone facades, while a pair of long pendant lights above the dining area are clad in brass to look like the decorative window frames.

Pianca and Kogan aimed to convert the space sensitively, so as not to damage the structure and make it easily adaptable again in the future. The existing concrete flooring was untouched, while the bamboo panels can be detached from the wall behind.

Among the main interventions is a 10-metre-long counter where cocktails, deserts and sandwiches are made. The counter runs parallel to the longer street-facing window, with niches and shelves built into the wall behind for storing beverages, glasses and crockery. There is also a pole for hanging bagels.

To shield diners from smells and noise in the kitchen, a wall extends from one of the three tile-clad columns in the space. It features an illuminated sign reading Hot Pastrami, and cuts into the counter. A large window punctuates the white partition to offer views between the two spaces.

Toilets are placed behind the kitchen, while other services – including a cold chamber, storage room, and staff locker room, dressing room and office – are placed below ground. 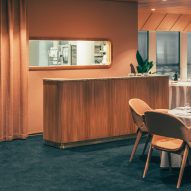