Dezeen promotion: huge wooden puppets and a retro American diner are among the exhibitions featuring in this year's edition of Ventura Centrale.

Following its debut in 2017, the Ventura Centrale venue returns to Milan design week for a second edition, encompassing 10 design installations in a series of derelict vaults near the Italian city's main train station.

Highlights this year include a project by architect Stephan Hürlemann and Swiss furniture manufacturer Horgenglarus. Called Riesen mit Zwerg, which translates from German as Giants with Dwarf, it comprises seven "wooden giants" standing up to three metres tall.

These sculptures function as puppets, with limbs that can be moved using a series of pulleys. They were built using century-old chair and table parts from the Horgenglarus archive.

Surface Magazine is working with architect David Rockwell and New York-based design studio 2X4 to offer a contemporary take on the traditional American diner, where visitors can relax, eat and socialise – which was named as one of our design week highlights.

It will showcase the work of both emerging and established American designers.

Other Ventura Centrale exhibitors include Japanese manufacturer AGC Asahi Glass, which will present an installation that uses sound-generating transparent glass. 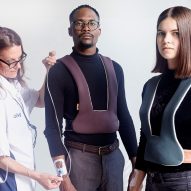 In addition, research centre Fabrica will present a collaboration with homeware brand Pierre Frey while Japanese brand Nitto is creating "a wall of colour".

Fashion designer Eileen Fisher is working with Li Edelkoort on an exhibition challenging the environmental impacts of fashion waste, called Waste No More, and an inflatable installation by Franco Mazzucchelli will also be on show.

Dezeen is the main media partner for Ventura Centrale, which takes place from 17 to 22 April 2018 as part of Milan design week.

It is one of two Milan exhibition venues organised by Ventura Projects, a Dutch organisation established in 2010 by Margriet Vollenberg. The other is new venue Ventura Future – the successor to the well-known Ventura Lambrate district, which has now been cancelled.

Vollenberg has also set up Ventura exhibitions in London, New York and Dubai.