Ventura Lambrate, one of the main showcases during Milan's annual design week, has been permanently cancelled – as a result of rising rents in the area.

Every April for the past eight years, Milan's Lambrate neighbourhood has been transformed into a major exhibition space for emerging designers. But organiser Ventura Projects has decided not to stage the event again, partly because of gentrification in the area.

"The success of Ventura Lambrate also meant that the area came into development," said Margriet Vollenberg, founder and curator of Ventura Projects.

"Some of the spaces that we've used for several years are not available anymore because they're being rented long term, which is a natural process of course," she told Dezeen.

"But we've also seen that spaces have become more expensive. At a certain point it became impossible for the type of exhibitor that I wanted to show in Ventura Lambrate; it is just not possible for them to be there."

Another result of the area's redevelopment, said Vollenberg, was that other projects came into the area that didn't align with her vision.

"It was no longer possible to guarantee a high quality of design curation," she said.

Instead, Ventura Projects will launch a new venue in 2018. The plan is to curate an exhibition inside a Milanese palazzo, which will be called Ventura Future. The organisation will also, for a second year, host the Ventura Centrale exhibition in the derelict warehouses near the city's central train station.

"We knew that, if we wanted to stick to our key principal – creating a platform for emerging talents in a setting that is attractive to the palette of the most important visitors – we needed to keep our offer for designers attractive and coherent," said Vollenberg.

"We want the best audience, platform, atmosphere, for our exhibitors and in the Lambrate area this is no longer possible for Ventura."

Vollenberg said that Ventura Future will be more suited to today's market, where designers and brands are no longer satisfied with showing products in basic settings, and are instead looking to create narratives around their designs.

"The new generation of designers and the emerging labels are searching for more specific places where they can tell a story, where maybe the surrounding noise is less, and where they can focus more," she explained.

Vollenberg established Ventura Lambrate in 2010, as the first fully curated area staged to coincide with the Salone del Mobile furniture fair. Since then, she has also set up Ventura exhibitions in London, New York and Berlin. 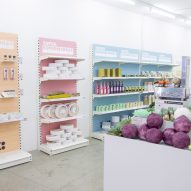