Tokyo-based Iwamoto began his Plastic Blowing project with the desire to transform a mass-produced material into a piece of art.

He combines the "old-fashioned" manufacturing process of glass-blowing with cheap, readily available PVC pipes that are typically used in plumbing.

First, the designer warms a PVC pipe over a heater for 15 to 20 minutes, until its surface adopts a soft, rubber-like consistency.

He then places the pipe into a wooden mould and inflates it by blowing into a hose-like tube – a process similar to glass-blowing. The mould creates a unique indented pattern on the surface of each vase.

"As with glass blowing, many factors such as the shape of the mould, air-pressure and the speed of heating the pipe's surface, affect the shape of each object," said the designer. 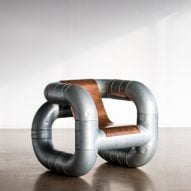 "Even though it is a mass-produced and cheap material, I believe that the hand-making process gives each pipe a new value by transforming it into a well-made object."

Iwamoto's vases are on show at Ventura Future – the new Milan design week venue, which replaces the now-cancelled Ventura Lambrate.

They form part of a section called Ex-Portation, hosted in the Loft building from 17 to 22 April 2018.

Dezeen is media parter for Ventura Future and its sister venue Ventura Centrale.