The OMA-designed building, which opened earlier this week, houses several collections of Qatar's most important texts and manuscripts on Arab-Islamic civilisation.

Initial images of the library's angular concrete exterior emerged on social media as it neared completion last year, but the interior has been kept under wraps until now. 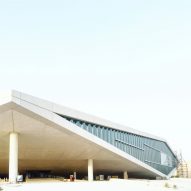 Inside, display shelves stretch out across terraces in every corner of the 138-metre-long library, and platforms jut out over the archives sunk into the centre of the structure.

"We designed the space so you can see all the books in a panorama," said OMA co-founder Rem Koolhaas.

"You emerge immediately surrounded by literally every book – all physically present, visible, and accessible, without any particular effort," he continued. "The interior is so large it's on an almost urban scale: it could contain an entire population, and also an entire population of books."

Each side of the building lifts at the edges, creating a diamond-shaped exterior profile and an internal space organised around three aisles of books enclosing a central triangular space.

A column-free bridge connects each of the main aisles and doubles as a platform for study spaces, reading rooms, exhibition areas and a multipurpose auditorium that can be defined by a retractable screen.

The shelves are central to the design and function of the library. Each one is made from the same white marble as the floors and infrastructure, and incorporate the lighting, ventilation and even the book return system.

Sunk six metres deep into the centre of the space are the bookshelves housing the heritage collection, with shelves clad in beige travertine to give the space an "excavated" feel.

Directly accessible from the outside, this section can function independently of the main library.

A facade of corrugated glass and a reflective aluminium ceiling are designed to filter and diffuse the bright sunlight to create the optimum light level for reading. Outside, a sunken patio allows light to filter to the basement levels .

Overall the building encompasses 42,000 square metres of space for books and readers, housing Qatar's National Library, the Public Library, the University Library, and the Heritage Collection.

It is part of a wider development called Education City, an academic campus hosting satellite campuses from institutions around the world. OMA has also designed the nearby Qatar Foundation Headquarters and a new facility for the Research Institute.

Last year the Dutch firm collaborated with Barcode Architects to build a library in Normandy in the shape of a giant slanted cross.

OMA, which ranked at 16 on Dezeen Hot List, has recently unveiled plans to extend a historic Jewish temple in Los Angeles with a skewed pavilion, along with designs for a coloured glass courthouse in Lille.