Niklas Jacob has worked with 17 other designers to produce a series of satirical flat-packed products in the style of IKEA furniture, for Milan design week.

The IDEA project is aimed as a reflection on the increasing popularity of furniture superstores, and IKEA in particular.

The Milan-based designer wanted to explore the relationship between "design supermarkets" and the flatpack philosophy, where a piece of furniture is assembled at home by the customer.

"I wanted to create a design exhibition on the concept of the supermarket, because we have seen these changes in the furniture industry, from specialised businesses to superstores," Jacob told Dezeen.

"For instance, you can furnish your entire home with IKEA products, so I invited designers from different nations to reflect on this to make an ironic piece that should follow the philosophy of the flatpack."

Currently on show at Milan design week venue SuperStudio, the project features 18 flat-pack products that would not typically be found in large-scale distribution, including a wooden car wheel and a dining table with a hole in the middle for "the person who needs to go on a diet".

The products are accompanied by a catalogue, which includes IKEA-style diagrams and Swedish names.

According to Jacob, the project references the work of Italian modernist designer Achille Castiglioni and the radical design movement that emerged in Italy in the 1960s. 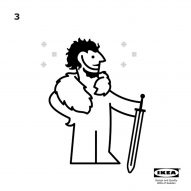 "I think humour is very important," he said. "In the past, in the 1960s the designs of Achille Castiglioni had a communicative and humorous side with many of his designs and also with the radical design movements in the 1970s that has been somewhat abandoned."

The first item in the collection is Chatt, designed by Ely Rozenberg. It is a round white table with several hollows, intended for users to place their mobile devices inside while eating.

"This is like the dining table for the family where you can communicate with anyone except the people next to you," explained Jacob.

"The Chatt table is a reflection on our times like we can sit in a group with our family or going out for a drink and everybody sits there with their own smartphones," he said. "It is a comment on today's social culture that we're social together but not really. We're actually anti-social because we sit together but communicate with others."

Another product is the Diät table by Kay Thoss, designed for people who "need to eat less". It is a square table with a large hole in the middle.

The Hans and Greta cage by Roberto Giacomucci resembles an enlarged wooden bird cage with a yellow cushion. It references the German fairy tale Hansel and Gretal, where two children are kidnapped by a cannibalistic witch and locked in a cage.

Meanwhile, Mosesvagga is a play on the biblical story of baby Moses travelling down the River Nile in a basket. It features an infant-sized white boat and wooden oars.

The collection also includes a black monolith, a cupboard to hide a lover, a podium to take selfies on, and a case to carry your canine.

IDEA is taking place during Milan Design Week at Superstudio in Via Tortona 27, Milan between 17 to 22 April. Other projects on show include flower vases made from pipes and furniture reinterpreted for the moon.