Optical illusions including a trompe l'oeil painting and mirrored walls alter the perception of space inside this extension to a south London house by architect Sean Griffiths.

The property is situated in a conservation area bordering Brockwell Park in the London Borough of Lambeth. Griffiths' design for the extension aims to increase the amount of light reaching the reconfigured interior.

The new addition is slotted onto a compact site to the rear of the existing building, and is carefully configured to achieve the required space whilst meeting strict local planning regulations. Some visual trickery helps to enhance the appearance of space.

"[The main issue was] dealing with that stupid rule that you can't wrap a back and side extension around the building," said Griffiths in a statement.

"In effect, you have to do two extensions – one at the side and one at the back, leaving a little indent to the extension in the corner."

The new room contains an open-plan kitchen and dining area that culminates in a row of full-height windows looking out onto a paved courtyard garden.

The windows extend beyond the dropped ceiling to create the impression that the structure's roof is a floating plane.

A floor-to-ceiling mirror is set into the wall at the corner where the enforced indent is positioned. The mirror creates the illusion of the space continuing, and therefore lessens the visual interruption resulting from the intersecting surfaces. 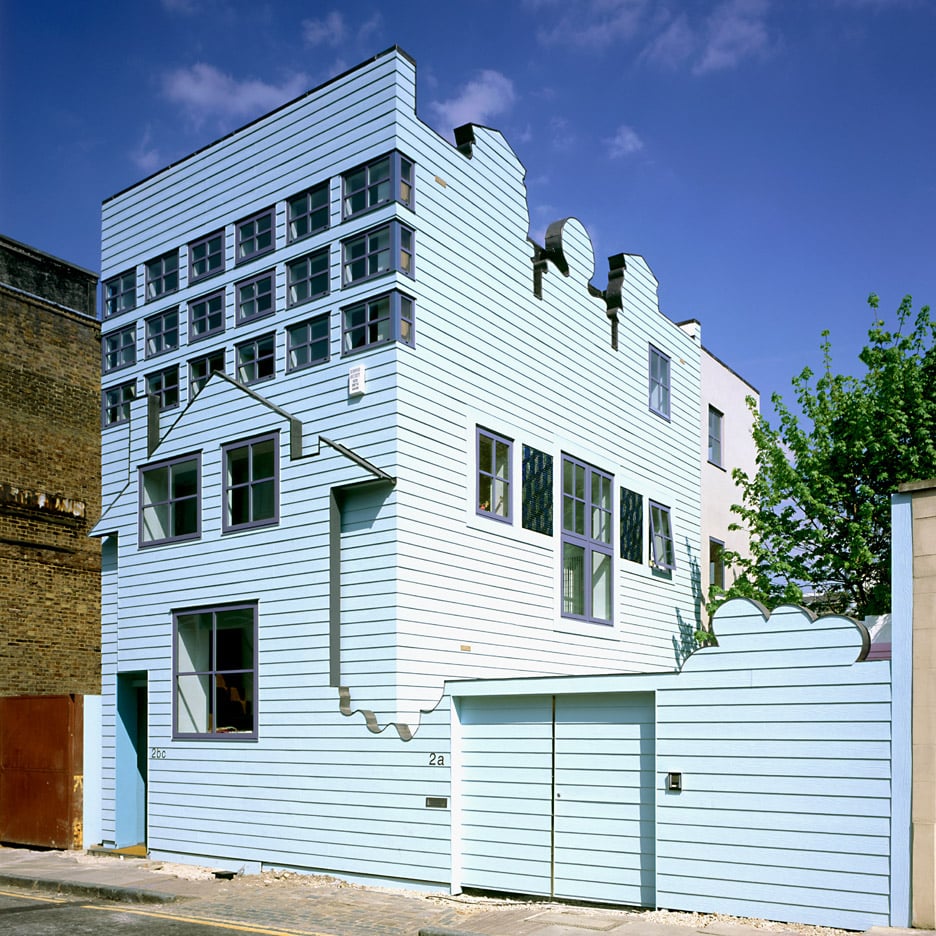 The rest of the design is described by Griffiths as "an experiment in geometry, materials, colour and illusion," with the colour scheme and geometric motifs in particular referencing a photograph by Andreas Gursky, which is a favourite of the client.

A column in the corner of the room and the frame around a mirrored doorway are rendered in pebble-dash finish that introduces a brutalist detail to the space.

The material contrasts with the slick glazing and powder-coated aluminium frames, as well as referencing the pebble-dash facade of the neighbouring house, which is visible from the extension.

The geometric theme is continued in the form of whimsical decorative details, including a tiled floor that uses a pattern of light and dark shapes to give it a three-dimensional appearance.

A trompe l'oeil painting on one walls looks like a distorted abstract pattern except when viewed from a certain angle that causes it to resemble a post and beam.

"The juxtaposition between the real and illusion is also played out in the use of mirrors, which create an illusionistic space that is every bit as powerful as the real one," Griffiths added.

"The kitchen itself plays a similar game of relating material and graphic qualities through the use of colour and metal mesh."

Griffiths is a former partner of London architecture office FAT, which was closed in 2014. FAT was renowned for playful projects such as a blue-painted property designed to look like a series of connected sheds, and a house inspired by fairytales created in collaboration with artist Grayson Perry.