Vitra is presenting hundreds of items from its archives at an exhibition during Milan design week. Curator Robert Stadler has revealed his favourite pieces, including Verner Panton's Living Tower, and a cork chair by Jasper Morrison.

Typecasting is currently on show as part of this year's Milan design week. The exhibition has taken over a huge space in the city's Brera district, named La Pelota.

Stadler has grouped hundreds of furniture pieces from Vitra's archives into what he describes as "characters" – each representing a different human behaviour or habit.

They include: the communals, the compulsive organisers, the slashers (people who are combining professions), the dreamers, the beauty contestants, the spartans, the restless, the athletes and the dating-site encounters.

"The idea behind this way of grouping is that the exhibition should tell something about us as people, not just the furniture presented," Stadler told Dezeen. "It gives a different insight into well-known objects."

"I went through an intensive course of Vitra, I found many things I'd never seen," he added. "We wanted a 'transhistorical' approach, so each community has historical and current items."

From the 200 objects on show, here are eight of Stadler's highlights:

The MVS Chaise was designed by Maarten van Severen, whose collaboration with Vitra began in 1996.

"There's something unstable when you look at it, as though there's one foot missing. But this missing part is actually something that adds to its function," said Stadler.

This chair was designed by George Nelson as he was researching his when open-plan office system Action Office 1.

"There's something discomforting about it," Stadler said. "There's a tool-like minimal seat and backrest, but it's interesting because it's a very early answer to the idea of dynamic working."

Panton's Living Tower can be used on four different levels, and stands over two metres high. Nooks are designed to create small seating niches in different positions – but also give the piece a sculpture-like feel.

"It's a fantastic piece in itself, it's as much a sculpture as it is a piece of functional design," Stadler commented.

The blocky geometric chair was designed by Burton in the 1980s, and was included as part of a limited edition range of Vitra pieces.

"In the exhibition, this is paired with a Hella Jongerius sofa as they're both made by stacking cubical elements," said Stadler.

Originally designed in 1946, the Freeform sofa features surfaces that look like flat stones found on the beds of rivers.

"I got to work with Noguchi last year, and what I love about his work is an ongoing back and forth between functional and sculptural objects," said Stadler. "This object shows that."

Stadler also chose this range by the Ronan and Erwan Bouroullec, which was released in 2016 and aims to bring the atmosphere of home into the office.

The Cyl collection of tables and sofas are made from solid wood and have a natural, minimalist look. In designing the range, the Bouroullecs rejected the integrated power solutions that come with office furniture, in an attempt to create a more domestic environment.

Jasper Morrison's Cork chair is made from blocks of recycled wine-bottle stoppers.

"It's a surprising material and is also surprisingly comfortable," Stadler said. "I don't always need concept – I sometimes can enjoy pure beauty and this is an example of that."

Meda based the idea of his Physix chair is made from a single textile panel stretched across a frame.

Stadler noted that its construction allows for a dynamic range of movement – an essential for an office chair. 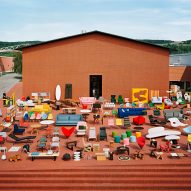