Melbourne studio B.E. Architecture has renovated and extended a Victorian property in the city for an avid art collector, adding a varied palette of materials that help distinguish the old and new parts of the building.

The design project for the St Vincents Place Residence began with a heritage building in Melbourne's inner suburb of Albert Park. The owner wanted to retain the house's historic character while creating a suitably contemporary home for his family and his art collection.

"The client, as a patron, put his belief in architecture, artists and artisans to create a nourishing environment that goes beyond surface treatments by inscribing contemplative experiences into the physical form," said the studio.

The house and its two neighbours were originally part of a convent that had been remodelled and repurposed over time, so the only thing remaining was the front facade's 200-millimetre-thick masonry wall.

B.E. Architecture developed a proposal for a 750-square-metre home to replace a cluster of sheds and outbuildings occupying the land behind the facade.

The rebuilding process enabled four levels to be created, including a rooftop terrace and a basement that would not have been possible to implement underneath an original structure.

The studio sought to achieve a sense of timelessness in the design, by incorporating classical details alongside carefully chosen contemporary materials to give the building an ageless quality.

"We shy away from trends or faddish materiality and are wary of architectural thumbprints, where the building is more about the architect than the space and the client themselves," B.E. Architecture's design director Broderick Ely told Dezeen. 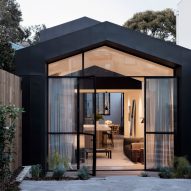 "St Vincent Place was a great site to develop in this sense as it was a period building shell that needed to be built up from scratch, so there were design opportunities not appropriate in a modern home."

The rooms to the front of the house incorporate features such as cornices, arched doors, and custom steel fireplaces that are intended to provide a strong connection to the Victorian frontage.

An entrance foyer adjoins a formal living room and leads into a circulation space containing a grand staircase, which sweeps upwards towards a large first-floor landing.

Due to the property being part of a Victorian terrace, it is enclosed on either side by its neighbours, so the stairwell was designed as a way to bring natural light into the centre of the building.

A wine room and study are also accommodated in the front section of the building, which is connected by a corridor to further spaces with a more contemporary feel toward the rear.

The corridor leads into an open kitchen and dining area flanked by a terrace. The terrace is enclosed by facades of in-situ concrete that emphasise the modern construction methods used for this part of the house.

Daylight and views of landscaping including a 38-year-old grape vine are provided by glazed walls that look onto the terrace, as well as a three-storey lightwell connecting all of the house's levels.

At the top of the building there is a roof terrace and barbecue area planted with olive trees. The upper floor contains the bedrooms, and the stairs continue down past the main living spaces on the ground floor to a basement accommodating a spa and utility areas.

The spa level includes a pool, steam room, a Japanese-style onsen, or spring, and a gym. The majority of surfaces on this level are lined in bluestone to add a natural texture to the spaces.

In addition to the concrete and bluestone, the modern material palette used for the rear extension also includes terrazzo-style stone floors and painted-timber ceilings.

"Rejecting stark minimalism, the classical details are exchanged for rich textures continuing the hand-hewn character throughout the house," said the studio.

Artworks are carefully distributed throughout the building, and in some places are even incorporated into the architecture. A text-based piece by Nathan Coley is fixed to the wall of the light well, while a niche carved into a wall alongside this space contains a wax sculpture by artist Berlinde De Bruyckere.

Vintage furnishings sourced from Europe and Asia contribute to the home's eclectic and exotic atmosphere. These pieces combine with custom-made furniture designed by the architects, including a cluster of transparent coffee tables containing books in the living room.

B.E. Architecture specialises in high-end residential projects, such as a house combining various textures of granite in Melbourne, and another property comprising a series of brick buildings arranged around internal courtyards in the town of Windsor.