A road that recharges the batteries of electric vehicles as they drive has opened on the outskirts of Stockholm, Sweden.

The 1.2-mile-long stretch of electrified road was developed by eRoadArlanda – a consortium including vehicle manufacturer DAF, property developers, technology companies and academic institutions.

It employs a system whereby energy is transferred to specially designed cars and trucks from an electrified track in the surface of the road.

A connection to the underneath of the vehicle is made by a movable arm, which automatically detects when the rail is near and lowers to begin charging.

Electric roads using overhead charging, similar to the way some trains and trams are powered, have already been installed in Germany and Sweden.

But the eRoadArlanda consortium claim that the in-road system is cheaper that overhead charging, and has several other advantages. They also say this is the first time that a track-based charging system has been installed on a public road.

"As far as we know, it's the most cost-efficient electric road technology so far," Hans Säll chairman of the eRoadArlanda told Dezeen.

"It can be implemented in the existing infrastructure, it works for both passenger cars and heavy vehicles, which overhead charging doesn't, and it's very discreet from an aesthetic point of view."

The track has been installed on a road between a cargo terminal close to Stockholm's Arlanda airport and the nearby Rosersberg logistics area. A fleet of lorries, which were developed for the project and are the first fully-electric powered trucks in Sweden, are now operating on the stretch.

As the trucks move down the road, 50-metre lengths of track are electrified to charge the vehicles. The amount of electricity used by each truck is tracked and charged to the user or owner. 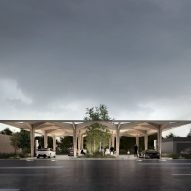 Charging vehicles as they move, as opposed to while they are stationary, has several advantages.

"It will make it possible to have smaller instead of bigger batteries, which will lower battery cost and their negative impact from a sustainability point of view," said Säll. "It will also decrease the cost and space needed for stationary charging stations along our highways."

The pilot project was jointly funded by the consortium and the Swedish government, which contributed 70 per cent of the cost.

The Swedish government is now looking at the potential to role out electric roads across the country, with eRoadArlanda estimating that the cost of installing the rails at less than £1.4 million per mile.

"Currently, they [the Swedish government] are evaluating and testing different technologies on shorter stretches of public roads, and in a few years they will procure a longer stretch of 12.5 – 25 miles."

Electric vehicles are increasingly in the news as major car manufacturers, including Volvo and BMW, are in the process of creating all-electric ranges. 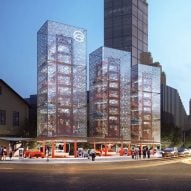 Unsurprisingly, attention is now being paid to how these vehicles will be charged. Philippe Starck recently unveiled a smart power dock for a hybrid Bentley, while architecture firm COBE revealed plans for a modular electric-car charging station that could be rolled out across Scandinavia.