New York studio The Extrapolation Factory has won this year's Lexus Design Award, with a project that encourages communities to speculate on the future of cities and daily life.

Testing Hypotheticals was announced as the winning project last Monday, 16 April 2018, ahead of Milan design week.

The idea, conceived by Brooklyn duo Elliott Montgomery and Christopher Woebken, invites members of the public to come up with solutions for possible future issues. During workshops, they then imagine how these proposals will impact daily life.

"This year's winner permeates the current thinking about the role of design in our evolving and technologically shifting societies," said architect David Adjaye, one of this year's judges. "Products play less of a role, and design education/teaching and thinking are at the forefront."

"How citizens and designers interact with products, processes and future is increasingly critical to mediating this influence of design in our increasingly future-oriented and technologically evolving world," he added.

The Extrapolation Factory invited residents of Corona, Queens – close to the site that hosted the 1939 and 1964 World Fairs – to participate in the initial two-part workshop.

Split into small groups, the locals came up with concepts that could become reality in the future and built models and props from a set of materials to demonstrate their ideas.

"We asked them to rigorously imagine futures through some of the processes being used by think tanks and strategy groups today," Montgomery told Dezeen.

These included growing food produce in subway cars, underground pipe networks that could distribute recyclable materials directly to different businesses, and connecting to memories from other places and times.

When they returned, the props were set up as a "test city" and a group of improv actors activated the hypothetical scenarios.

"We're really interested in the idea of taking this platform and doing it in lots of different neighbourhoods where it makes sense, maybe other communities that have different stories to tell," Montgomery said.

"Once we start to expand out this same platform across neighbourhoods, we'll get to compare and contrast, and see where these bottom-up versions of futures help us navigate towards a different world than the one we're currently in." 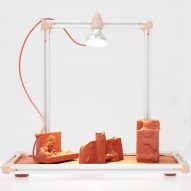 Entrants were asked to respond to this year's theme "CO-" – the Latin prefix meaning "with" or "together" – which resulted in a wide variety of projects based on relationships.

A dozen finalists were selected from over 1,300 entries from 68 countries, and all were exhibited at the Lexus pavilion in Milan's Museo Nazionale della Scienza e della Tecnologia.

Earlier in the year, the judges has further whittled down the shortlist to four projects, which were given funding to prototype their designs and ideas, and mentored by internationally renowned designers.

These prototypes were also showcased at the Lexus pavilion, where the panel finally decided on the winner.

Milan design week took place from 17 to 22 April 2018. Lexus has participated in the annual festival for many years, and established the design awards in 2013. Previous winners have included a packaging product made from seaweed. 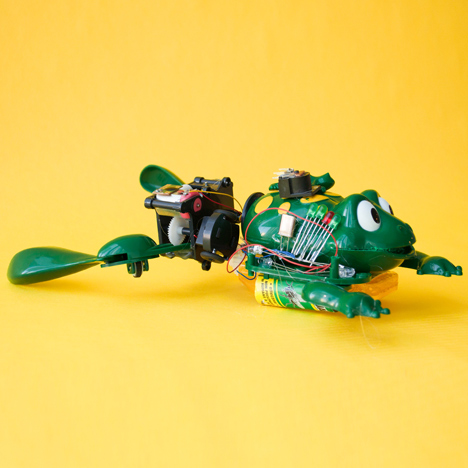 "Lexus is aiming to be an lifestyle automotive brand," said Sawa, speaking through a translator. "With that in mind, design is always an inspiration that solves issues and problems. It is important for Lexus to be here in Milan, where a lot of the design inspiration originates"

"We see the importance of working together and developing young designers who could contribute in the future and create a better society," he added.