The Extrapolation Factory was founded in 2012 by Elliott P Montgomery and Chris Woebken – both graduates from the Royal College of Art's Design Interactions course – and uses everyday objects to prototype ideas for an imagined future.

The studio conducts workshops with "non-experts", ranging from museum visitors to school children. These sessions encourage participants to think about the potential outcomes of current social trends and produce ad-hoc solutions from everyday products. This concept is nominated in the product category for the Designs of the Year 2015 award.

In July 2014, the duo launched Pawn Tomorrow for an exhibition at New York's Museum of Arts and Design. They asked members of the public to consider what they would exchange at a pawn shop of the future, and what its value might be.

"Normally the realm of future studies is restricted to a small handful of strategists, thinktanks and academics so you end up with a set of ideas that go in the same direction," Montgomery told Dezeen. "By opening up the capacity to think about the future, you give society a better shot at seeing a more varied multiplicity of futures that allows us to make better decisions."

During a series of workshops, visitors used household materials to fashion objects informed by current and predicted technological developments that could be sold at a pawn shop in 2050. The products were displayed at the museum alongside descriptions of their purpose.

Following the closure of the exhibition in October, the objects were appraised and valued by futurists and posted on the online Pawn Tomorrow shop.

Items currently for sale include a device that determines how foods and supplements will affect your body, priced at $4,000 (£2,700), and a robotic drone that delivers healthy yoghurt to its user, priced at $99 (£67).

The profits from the sale of the objects are donated to a research organisation that might one day make the envisioned future a reality.

"We tried to build a feedback loop where we collect ideas already starting to change the world as we know it, allow lots of non-experts to add their version of what the future could look like, nuance it by asking expert futurists to give it a qualification and then bring it back to the research groups so they can consider it as an interesting influencer for their work," Montgomery explained. 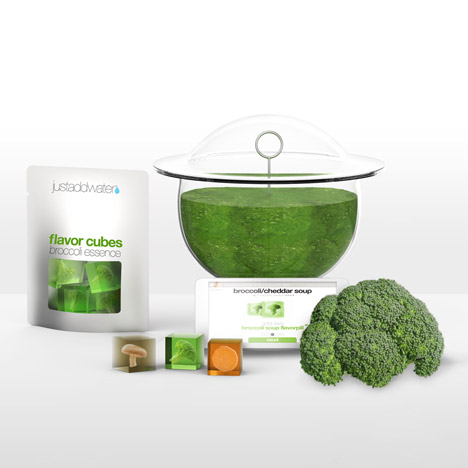 Since its launch, the studio has performed over 20 research experiments with non-profit organisations, corporations, academic institutions and cultural centres.

In 2013, the studio conducted a workshop using forecasts about the future by a range of analysts as the basis for a series of objects that could be sold in a future 99¢ store.

Products including DIY organ-transplant kits and a universal language translation device were distributed among the familiar products in an existing store, for visitors to come across unexpectedly during a one-off "Time-Warp Opening".

"The notion of democratising the practice of futuring is really the core ethos of what we do," said Montgomery. "We want to take tools that are used in more focused spaces like thinktanks and extend those out into public contexts."

"When people think about possible futures, it's easy for them to fall into the trap of repeating what they've seen presented to them in Hollywood scenarios – a lot of flying cars and things like that – and that's not what we're interested in," he added.

"We're looking for ways to make this process of thinking about the future more realistic and accessible."

According to Montgomery, the future for The Extrapolation Factory will see it start to diversify from the familiar fields of research and technology and examine how its methods could be applied in new areas, including the finance industry.

The Extrapolation Factory is on the shortlist for the product category of Designs of the Year, alongside a building material made from agricultural byproducts and designer Paul Cocksedge's circular bike lights.

Dezeen is media partner for Designs of the Year 2015, which is organised by London's Design Museum. Last year, a piano keyboard with soft keys that enable musicians to alter the pitch, timbre and volume of the note triumphed in this category.