New atria and glazed rooftop pavilions are among the alternations to a historic educational building on Princeton's campus in New Jersey, as part of a project overseen by Canadian studio KPMB.

The project entailed the renovation of a 1929 gothic-style building that formerly housed chemistry laboratories. Originally designed by American architect Charles Klauder, the three-storey, grey academic building sits between Princeton's historic west campus and its more contemporary structures to the northeast.

The university aimed to "transform the large, monolithic building into a porous, transparent and welcoming learning and research environment", said KPMB, a Toronto-based firm.

Now totalling 197,500-square-foot (18,348 square metres), the overhauled building has new tenants – and two new names. The portion housing the university's economics department is called the Julis Romo Rabinowitz Building, while the area housing the Princeton Institute for International and Regional Studies has been named the Louis A Simpson International Building.

The two programme areas each have their own distinct entrance – the economic department is entered from the west, and the international space from the south. Throughout the building, visitors find a range of classrooms, offices and meeting areas.

The project entailed both renovations and new construction. The building's concrete frame and masonry facades were retained, as was a rectilinear volume on the south that had been added in 1964 by New York studio O'Connor and Kilham.

Select areas were kept intact, such as the building's historic entryway with its pointed-arch openings. In a former library, which is now a faculty lounge, the team preserved wooden wall panels and white oak flooring. 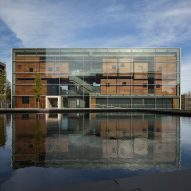 On the roof, the team added glazed pavilions that slightly rise above the roofline. Within the building, two new atria were created.

One sits just off of the historic lobby and features a glass-walled box that is suspended from a wood-clad ceiling. The atrium is fitted with contemporary lounge furniture, and is ringed by corridors and glazed walls.

The other atrium is situated on the south, inside the 1960s addition. The lofty space features original masonry walls, grey tile flooring and cafe seating. Clerestories usher in soft natural light.

Just outside, the south facade overlooks a plaza with a sunken reflecting pool, designed in the 1960s by American architect Minoru Yamasaki. Connections between the plaza and the campus were enhanced.

"The campus pedestrian pathway system was extended into this precinct as part of the landscape design," the team said.

Other projects at Princeton include a renovated library by Joel Sanders Architect that features rooms awash in blue, and a new arts complex by Steven Holl that overlooks a reflecting pool. 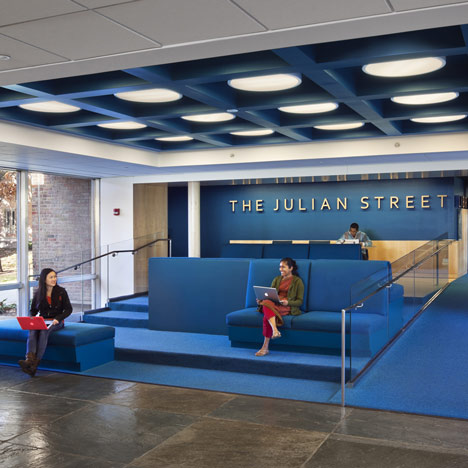