Madrid-based Mayice Studio created this sculptural lamp using a single piece of curving glass, as a study into how light travels through concave and convex forms.

Measuring at over a metre long, the Filamento light was debuted at Spazio Rossana Orlandi during this year's Milan design week.

Mayice Studio formed the lamp from one long tube of glass and one filament, which creates a laser-like effect when lit up in a dark room.

When the light is off, its undulating glass design allows the light to stand alone as an ornamental centrepiece.

"When illuminated, its form and matter disappear, giving way to a filament of light as a result of the study of its geometry," explained the duo.

"The propagation of particles called photons becomes a visible and linear form of energy. It serves as a study of how light travels through concave and convex glass," they added.

The light was designed as a modular system. Each of the 1.26-metre-long lights can be attached to one another. The studio attached four Filamento pieces together to form a five-metre-long installation for Spazio Rossana Orlandi.

The installation was displayed in the gallery's basement during the design festival, which came to an end on Sunday, 22 April 2018. 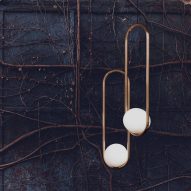 Matthew McCormick's Mila lights are "a study of reductionism"

The original metre-long light was hung in Rossana Orlandi's restaurant on Vía Matteo Bandello 14 in Milan.

The designers told Dezeen that they spent a lot of time researching and experimenting with different light rays, intensities and glass forms to create the effect of a "filament of light".

They designed and manufactured a special bulb that utilises LED technology to make the lights dimmable. According to the duo, users can control the intensity of light from their smartphone.

The lamp is suitable for both indoor and outdoor use, and every element of it was crafted in Spain – where the designers hail from.

"We dreamt of Filamento enlightening the large table frequently used at dinners during Fuorisalone in Rossana Orlandi's courtyard. That's why we needed an outdoor lamp," Mayice Studio told Dezeen. "So we found a special glass that could bear sudden changes in temperature." 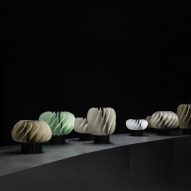 Photography is by Pablo Gomez Ogando.