A traditional Israeli dance is transformed into 30 spinning glass lamps in this exhibition by London studio Raw Edges.

Called Horah, the Milan design week installation consists of sculptural glass lights in a variety of sizes and colours. Each one gently rotates, so the exhibition is constantly in motion.

The project takes its cues from a dance of the same name, which originated in the Balkans but was adopted in many countries. For Yael Mer and Shay Alkalay of Raw Edges, who are both from Israel, it is a dance that they associate with home.

"In Israel in the 1950s, there was a very common Horah dance, I would say the traditional Israeli dance," Alkalay told Dezeen. "In those days it was very common for people to dance together in a circle."

"We liked the idea of lots of things moving together at the same speed, like in dancing or swimming, or if you think about the army marching in the street – there is something powerful about that," he said. "We thought, let's play with that."

On show at Spazio Krizia throughout Milan design week, the 30 lamps are dotted across a large platform that curves across the gallery.

Each one features curving glass "leaves", which are attached to a pivoting motor. The light is concealed at the centre, so is not directly visible, but creates a gradient of illumination across the glass leaves.

According to Alkalay, one of the challenges of the design was creating a shape that looked good from all directions.

"The shape is constantly changing," he said. "Usually, when you design something, you do the sketch and you try to find the best proportion. But here it's always moving. So what is the best silhouette?"

Mer and Alkalay founded their London-based studio in 2007, after graduating from the Royal College of Art. Past projects range from rainbow-patterned furniture to optical-illusion rugs. 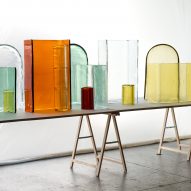 The pair were invited to create this installation by Venetian glass brand WonderGlass. It was their choice to create lighting, in the knowledge that other designers had previously exhibited lighting in this gallery – Formfantasma last year, and Ingo Maurer before that.

At the moment the lights have only been made for the exhibition, but the designers hope to create a production version.

Horah is on show at Spazio Krizia, on Via Daniele Manin 21, from 17 to 22 April as part of Milan design week. WonderGlass is also showing another project in the city – a range of painterly glass objects designed by Ronan and Erwan Bouroullec.