Rooftop seal pools and a sloping plinth that meets the tide will feature in Dorte Mandrup's visitor centre for the UNESCO-protected Wadden Sea in the Netherlands.

The Danish architecture studio founded by Dorte Mandrup, one of the judges in the inaugural Dezeen Awards, has already won the commission to design the other two centres in the Wadden Sea trilogy.

"By informing visitors about the important surrounding ecosystem and in creating an engaging architectural space, the aim is to make it an even more unique experience to visit the Wadden Sea," said Manrup.

For the centre in Lauwersoog in the Netherlands the architects have proposed a four-storey building that projects out on wooden stilts at one end over a ramp leading down to the sea.

The stilts reference historic harbour piers, and the sloping plinth will highlight the water level rising and falling with the tide. Wrap-around glazing and sea-facing balconies will further connect the architecture with the surrounding water.

Inside the centre there will be spaces for temporary and permanent exhibitions on the first floor, with sloping floors and ramping pathways leading up through the the space to the second floor "experience" area.

"We found inspiration in the spiral-like incline in the floor from the changing tides of the Wadden Sea," explained Mandrup.

"Each level of the building leading up to the next gives the guests a sense of being at one with the tide." 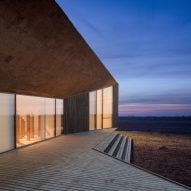 Along with a shop, cafe and restaurant, offices and research facilities, the centre will have a seal centre with tanks for the marine mammals on the top floor of the building. The restaurant will be positioned so visitors will have views of the wildlife observation pools, and the rooftop terrace will have panoramic views of the sea and shore.

Endemic grey seals had almost disappeared from the region by the end of the 20th century, while local harbour seals almost died out when a potentially fatal virus killed of almost 60 per cent of the population between 1988 and 2002.

In recent years the seal population has recovered, due to the United Nations' Wadden Sea Seals Agreement in 1990. Part of the reason the area was given its UNESCO status was to further protect the seals' natural habitat. 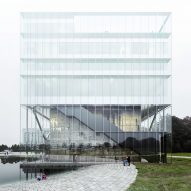 The Groningen centre, with its seal conservation theme, is due to open in 2020.

Dorte Mandrup has already completed a wing with a sculptural thatched roof for the visitor centre in Ribe, on Denmark's western coast. The mondern extension was made to the existing centre, which sits on mud flats that play host to millions of migrating birds.

The Copenhagen-based studio also has plans to wrap a visitor centre around a historic second world war bunker in Wilhelmshaven, on the German coast. The Wadden Sea area spans Denmark, Germany and the Netherlands.

Dorte Mandrup is also working on another World Heritage project in Greenland, which will have a tent-like structure and a platform for watching icebergs.

Renderings are by Dorte Mandrup.