British designer Es Devlin has rethought the typical residential sales gallery, using a trio of installations to promote a pair of twisting towers that architecture firm BIG has designed for New York.

A giant oval model of Manhattan, a building model rotating over a pool of water and a wraparound video projection are the devices Devlin has employed to help entice potential buyers of residences in The XI – currently under construction in Chelsea.

She teamed up with architect and BIG founder Bjarke Ingels to create the 12,000-square-foot (1,115-square-metre) gallery, which will soon open to the public a few blocks away from the development, in the Meatpacking District.

The duo both featured in the recent Netflix documentary series Abstract: The Art of Design, in episodes where Ingels explained some of his best-known buildings and Devlin described her stage set designs for performers like Beyoncé, Katy Perry and The Weeknd.

They ended up collaborating on The XI Gallery after a thumbs up from the project's developer HFZ Capital Group, founded by Ziel Feldman.

Devlin said she approached the project as an outsider to the world of luxury condo sales.

"I came at it from an outside point of view, and thought 'how would you normally describe something that's not there?'" she told Dezeen.

The designer then reinterpreted three typical tools used to communicate an unbuilt project: the context model, the building model and the glossy brochure.

"Staying rather close to that paradigm of a triptych of information, but trying with each one to embrace the work of Bjarke as I might with any other primary source – be it an opera, or the lyrics of a singer that I might work with," Devlin said. 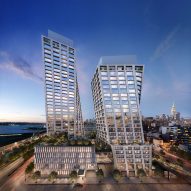 The XI towers in New York will "dance" with each other, says Bjarke Ingels

The first in her trio of installations is called Egg, and displays a huge scale model of Lower Manhattan laid over a concave shape.

The XI development, located on the Hudson River between 10th and 11th Avenues, sits front and centre of the model, while the rest of the city curves away up the sides. A mirror above reflects the composition to form an egg shape.

"When Bjarke first saw it, he was looking at it and working out the perspective of it," said Devlin. "It uses a series of perspectives in order to focus on the building that's being made, and flow the geometry over this form. Which it's not naturally inclined to, at all."

Projection-mapped lighting illuminates the model – designed in Devlin's London studio and built in New York by Michael Kennedy – in different colours and with various shadow effects.

At one point during the looped video, a giant hand begins drawing lines across the cityscape to represent the architect.

"Although it's an abstraction, I actually think it's more true to how you feel when you experience [a city]," Devlin said. "The peripheralisation of everything."

The designer used a similar technique for the set of the play Ugly Lies the Bone, which she created at London's National Theatre last year.

At The XI Gallery, her second installation is named Paper, Stone, Glass, Water. Instead of a virtual walk-through of BIG's scheme, visitors can watch a film in which Ingels talks through his design ideas for the project.

As he speaks, animated sketches and abstract representations of the project's travertine facade and bronze window frames appear across the screen, which wraps three sides of a dark room.

"In the spirit of how do you give a virtual tour of something that doesn't exist yet, what does exist is the thinking," said Devlin. "So let's give a virtual surround-sound tour of how the idea came about."

The final piece in the series is Dance: a larger scale model of the complex that shows its twisting towers, cultural block and central courtyard.

The model is placed atop an elevated reflecting pool, and slowly rotates to show off complex geometries of the buildings from every angle. Ingels told Dezeen that the structures are shaped in "mutual courtesy" for one another's views.

"The object itself as a sculpture, how do you display that sculpture?" said Devlin. "In reflection and in rotation seemed to me kind of obvious."

Photography is by Nikolas Koenig unless stated otherwise.