British designer Es Devlin has drawn on the aesthetic of afrofuturism for The Weeknd's stage set at Coachella music festival, which features a massive cracked mask animated by projection-mapped lighting.

The 30-foot-high (nine-metre) face sculpture forms the backdrop to the Canadian singer's headline act at the 2018 edition of the annual Coachella music festival.

The set, which first took place on Friday 13 April 2018 and will play again this weekend, combines his new EP (Extended play) My Dear Melancholy with previous tracks like Pray for Me, from the recent blockbuster movie Black Panther.

The Weeknd, whose real name is Abel Tesfaye, asked Devlin for "an afrofuturist sculpture for his performance" to follow his work on the soundtrack for the film, which features costumes and sets that reference afrofuturism – a cultural movement that combines African culture and identity with technology and science fiction.

Devlin came to the idea of a computer modelled mask of the singer's face, detailed with striations and a massive scar, which suits her interest in making "alter egos" for performers – like her large projections of Beyoncé during the singer's Formation world tour.

"Tesfaye had been working on the Black Panther soundtrack and he and close XO [record label] confederate Lamar Taylor envisaged Afro Futurist sculpture for his performance," Devlin told Dezeen.

10 architects and designers that are championing afrofuturism

"I have been interested for some time in the practice of 'portraiture' in concert performance – particularly in the use of alter egos, stage personas, masks and make up," she continued.

"Here the afrofuturist aesthetic and my 'pop portraiture' project found common ground in the form of a large-scale scarred mask sculpture."

The theme of Devlin's set follows a growth of interest in afrofuturism, which has seen a surge in the wake of Black Panther and focused attention on Africa's already burgeoning creative scene. A host of African designers and architects are also championing the cultural movement.

To create the mask for The Weeknd's set, a 3D scan was taken of the singer's face and modelled on the computer to add the crack down the middle. An enlarged version was then sent to be cut using a computer numerically controlled (CNC) router. This formed a negative mould to cast the fibreglass final piece.

The face is accompanied by a huge clawed-hand sculpture erected beside. Both were fabricated by California-based company Artistic Entertainment Service.

At the beginning of the set, the face parts in two at the scar to create a large opening for the singer to emerge. More drama is added throughout performance, as projection-mapped lighting plays across the surfaces of the two sculptures and a series of large screens behind. 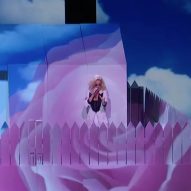 Es Devlin was named the winner of this year's Panerai London Design Medal and also ranked at 211 on 2017 Dezeen Hot List of the world's most newsworthy forces in design.

The British designer has previously created sets for The Weeknd's world tour and caused a stir with her backdrop for singer Katy Perry's politically charged Grammy Awards performance, which featured a picket fence that grew into a wall.

The Weeknd's next performance at the Coachella music and art festival takes place on Friday 20 April 2018.

Along with the music acts, visitors to the festival are also treated to large-scale sculptures and installations that are built across the site in the California desert, close to Palm Springs.