Rows of seats supported on simple stalks project from slanted concrete volumes to create a grandstand at this open-air chapel designed by Enota, in the Slovenian village of Skorba.

Ljubljana-based architecture studio Enota designed the structure to be a new social hub for the village near Slovenia's oldest town, Ptuj.

Over recent years the village has gradually transformed from a small rural settlement into a suburb for commuters working in the nearby town.

Skorba's organic expansion altered the historic clustered street plan, and left the village without a defined centre or space for public meeting and events.

A decision to create a new chapel in the village prompted Skorba's inhabitants to consider creating a multipurpose space that could also fulfil the functions of a traditional public square.

Enota worked with the local community to determine the key programmatic requirements of the new structure, which can be used as a space for outdoor events and general socialising.

The village's inhabitants helped to raise funds to purchase the plot for the project, and contributed many hours of voluntary work to facilitate its construction.

Due to the involvement of the villagers in the building project, Enota developed a design that would be straightforward to erect and did not require exceptional accuracy or high-tech equipment.

According to the architects, the design "aims to establish an appropriate relationship with its surroundings and a sufficiently bold appearance, chiefly by means of a clearly legible volumetric design and simple materiality."

The new space is located at an important intersection where the main roads through the village converge, and is close to the existing community centre.

The concrete structure is positioned centrally on the vacant plot and is partially embedded in a grassy bank. A narrow path extends across the grass to connect the main functional area with the adjacent road. 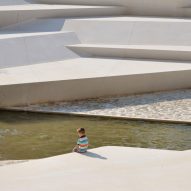 "The central part, created by the section of the geometries of both paved surfaces, is given a slight dip," the studio pointed out, "which shelters the event space from the impacts of the surroundings and directs all users' gazes towards the centre."

Around the flat central area, three angular concrete volumes rise up to form the grandstand-like seating areas and the chapel.

The arrangement of the structures creates a sense of privacy within this space, while the truncated shapes give the impression of an invisible roofline unifying the separate volumes.

White concrete is used for the entire structure to give it a homogenous aesthetic and to facilitate its straightforward construction.

"The combination of simple materiality and emphasised volumes creates an attractive spatial element," the architects added, "its appearance sufficiently bold to drown the heterogeneous structure of the surroundings and mark the significance of the area."

Rows of square seats fixed to extruded metal supports are bolted to the concrete surfaces to provide places for the audience or congregation to perch and look down towards the square or chapel.

More architecture and design in Slovenia