Sony's latest research suggests that the homes of the future will feature sensors that can turn any object into a light switch or a music system, and lighting and shadows that follow you around.

The tech giant unveiled the results of a four-year research project into the future of interaction design and screen-less technology with its Hidden Senses exhibition, held during Milan design week.

The show featured both technological "magic tricks" and practical examples of how hidden sensor technology could be used in a domestic setting.

Among the designs arranged across the exhibition's five rooms was a piece of paper sellotaped to a wall, which appeared to move as a person approached, due to movement-controlled lights that created artificial shadows around the paper.

Other highlights included a paper photo album that controlled a wall display of photographs, and a series of design objects – including a vase, a candleholder and an hourglass – that functioned as controls for lights, sounds and images, when activated by a user's movement.

Sony described the projects as visualisations of an "enriched lifestyle" that will be made possible by advances in sensor technology, enabling familiar objects to become points of technological interaction.

"We've been studying a lot about that context [of the home] to find a new kind of interface interaction," said Hirotaka Tako, chief art director for Sony's Studio 1, the Tokyo-based design and development team behind the research and experiments displayed in Hidden Senses.

Tako said that one of the aims of his team was to "remove the learning process for technology, [so you don't have to] read the guidebook.

"It can be instinctive. If there is a candle, it can be light. It can be anything, it's up to you," he said.

Each of the five spaces in the exhibition focused on a different type of experience and application of sensory technology, to create subtle forms of audio, visual and tactile communication.

The first, called Echo, featured two rows of square columns that contained movement sensors. When visitors passed between and around the columns, they created sounds in response to individual movements.

The second space was called Under The Light. It contained four experiments focused on light and shadow, with wall lights that changed in response to movement detected by different sensor arrays to create various effects – including the sellotaped piece of paper that looked like it was moving.

"We now have so much information, with smartphones and tablets and TVs, and it's really really noisy with all these notifications," Tako explained to Dezeen. "I thought we might find something in between all of this technology and a normal life – that was the trigger."

The third space was called Tactile Objects. It focused on touch and sight, with objects placed on tables under hood-like structures that contain sensor units to enable different responses.

Examples included a sound system controlled by three geometric, stone-like objects, which changed the type of music, the volume and the tone when moved. There was also a jug that contained no liquid but felt and sounded like it was pouring water when picked up and tipped.

The fourth space, titled Abstract Electronics, included six playful projects, including a room-divider made from glass panes that pivoted and became transparent or opaque as they turned, muting the scene behind. 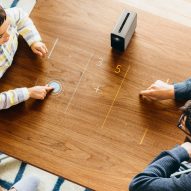 It also included a shelf unit with a back that could change from a marble-effect to a wood effect based on a material sample being placed on one of its shelves. The back of this unit was a super-thin screen. A rectangular picture frame could be placed anywhere on this surface to create a screen-within-a-screen, showing a moving image in contrast to the marble or wood-effect around it. When the frame was removed, the image disappeared, and it would reappear wherever the screen was placed.

The final space was called Day and Night. It was styled like a home interior, with a series of vignettes that each demonstrated a different application of the technologies shown earlier in the exhibition within a more familiar environment.

Among them were picture frames where the image zoomed as a person approached, a corridor where the light moved with you, a wall clock that changed time zones in response to the turning of a block on a desk below, a plant that told you the weather forecast, a paper photo album that controlled a wall display of photographs as the pages were turned, a TV and picture wall controlled by a geometric object, and a table where pools of light appeared as each individual sits down, creating personalised reading and dining spots.

Also included in this space was a series of small, everyday objects that had been turned into interfaces to create mood lighting and effects, including a candleholder that created a localised, glowing light when a hand was passed over it or it was pointed at.

Tako said the projects were about exploring the possibilities of sensor technology beyond simple gesture controls.

"If it's just a gesture it's not interesting," he said. "It's about combinations of behaviour. If we can assign any object as a trigger for changing the mood or the lighting or to control the music, it doesn't have to be controlled by a gesture. It's not about the gesture, it's about a new type of interface." "These applications are all possible," he added. "The sensors are working, the speakers are working, the screens are working. But we have a lot of things to do to be in production with this. These are ideas to be open to the world, maybe to get feedback, maybe to find a friend to work with, to collaborate, so we can come together as an industry. Then this idea might happen in society."

Sony's showcase was on exhibited at Spazio Zegna in Milan's Tortona district from 17 to 22 April.

It was one of several tech brands present in Milan this year. Others included Instagram, Panasonic and Google, which worked with trend forecaster Li Edelkoort to explore the future of tactile technology.