The Fearless Girl statue that faces down Wall Street's Charging Bull and the environmentally minded Palau Pledge tourist visa are among the big winners from this year's D&AD Awards, which recognise the  best in communication design.

Fearless Girl is a bronze statue of a defiant young girl, facing the Charging Bull on Wall Street, New York

McCann New York was awarded a Black Pencil for outdoor advertising with Fearless Girl – a bronze statue of a defiant young girl, which faces the iconic Charging Bull that has stood on Wall Street since 1989.

Created by sculptor Kristen Visbal, the statue was commissioned to highlight State Street Global Advisors' gender diversity index fund, which comprises gender-diverse companies that have a relatively high percentage of women among their senior leadership.

"In honour of International Women's Day 2017, we partnered with State Street Global Advisors to introduce the Fearless Girl to the world – a statue of a daring young girl, standing strong on Wall Street," explained McCann New York.

"Why? Because companies with women in leadership perform better," it said. "The Fearless Girl was dropped on Wall Street in the middle of the night and became a global phenomenon within 24 hours."

Australian advertising group Host/Havas claimed one Black Pencil for branding with its Palau Pledge campaign for the Palau Legacy Project.

Before entering the country, all visitors to Palau, an archipelago made up of some 200 islands in the western Pacific Ocean, are now required to sign a passport pledge to act in an ecologically responsible way on the islands.

Palau is the first nation to change its immigration laws in order to protect the environment. Children from all over Palau participated in the drafting of the pledge, which was introduced in December 2017.

"Through an initiative designed to create a meaningful connection with individual tourists, we activated social pressure to 'do the right thing' and behave in an environmentally responsible way whilst visiting some of the most beautiful places on earth," said the agency.

The final Black Pencil went to Saatchi & Saatchi NY for its It's a Tide Ad campaign, which was broadcast during this year's Super Bowl.

Featuring actor David Harbour, the advert features a sequence of clips. They begin as ads for products in other categories, such as duimonds, mattresses or beer, before Harbour comically reveals that they are actually adverts for Tide laundry detergent.

The explanation he gives is that the stainless clothes and textiles you see in almost all commercials technically makes them all "Tide ads". 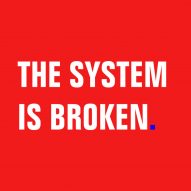 "Three Black Pencils have been awarded, two of which use creativity as a means to create a better world," commented Lindsay. "But we've also seen a marked focus on humour and playfulness."

"Design and advertising can be used to encourage debate and engender social discourse, but it can and should also entertain. Also, sell stuff. In the current social and economic climate, we need all of the above."

Established in 1962, D&AD is a member-run organisation that aims to champion the best in creative communication.

"This has been an outstanding year for creativity," added Lindsay. "We received entries from 50 countries across all continents, attesting to the truly global nature of our programme and the impact of D&AD in stimulating and celebrating talent from around the world."