A new amusement park in Japan will bring to life the worlds of Studio Ghibli, the Oscar-winning animation house known for its films Spirited Away and My Neighbour Totoro.

Set to open in 2022, the Studio Ghibli park will be built on the Expo 2005 Aichi Commemorative Park in Nagakute city, near Nagoya in Japan's Aichi Prefecture, according to the regional government.

Built to integrate with its surrounding natural environment, the theme park will expected to "become a one-of-a-kind park that is loved by everyone".

No architects or designers have been named at this stage. But according to Aichi government representatives, the park will be built "without impairing the function and the natural environment". It will take into consideration the historical origins of the site, while also making "effective use of unused land and existing facilities".

The 200-hectare amusement park, which was originally proposed to open in 2020, will feature European brick buildings like those which appear in many of the studio's films, including a main gate that evokes the late 19th-century architecture in Howl's Moving Castle.

The park will be divided into separate areas that will include Princess Mononoke Village and Witch Valley – an area dedicated to Kiki's Delivery Service and Howl's Moving Castle-themed attractions. 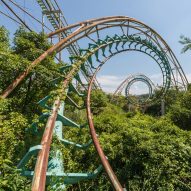 According to news website NHK, the park will also feature a recreation of the antique shop from Whisper of the Heart and a Big Ghibli Warehouse with exhibition spaces, a theatre and recreational areas. Installations of the animal spirits featured in Studio Ghibli's animations will also be dotted across the park.

Another area of the park, the Dondoko Forest, is already the location of the house from My Neighbour Totoro, which was built for Japan's 2005 World's Fair.

Aichi officials have yet to comment on the construction costs of the park.

Studio Ghibli is an animation studio based in Tokyo, best known for its anime feature-length films. It was co-founded by directors Hayao Miyazaki and Isao Takahata in 1985.

Its 2001 Oscar-winning film Spirited Away is the second highest grossing anime film ever and is widely recognised as one of the best contemporary animated films.

The opening of the theme park will follow the success of the Ghibli Museum in Tokyo, which opened in 2001 and includes an exhibition space, children's learning facilities and a theatre.