Named Limitless Co-existence, the installation comprised a series of spaces in which a single source of light was used to illuminate multiple objects and items all at once, so that none were in shadow.

The theme of co-existence informed all the different parts of the exhibition – from visual aspects to audio and olfactory stimuli.

Before reaching the main installaion, a series of speakers supported on thin legs guided the way from the museum's entrance, and played bursts of white noise to "clear the mind" on the journey. The scent of Bergamot orange was released in these and other areas of the installation.

"We started with the aroma, which for us was the most important thing," said Altatto. "Bergamot is very well known for its harmonising role, in perfumes and with ingredients."

Visitors eventually reached a dark corridor, where the first of Ichikawa's laser pieces was situated a few metres down.

Set into the wall was a small box, in which a single string was lit using a thin beam of light. It shone perpendicularly so they crossed each other in the centre and created a single point of focus.

Further along the corridor was a figure-eight-shaped table with hundreds of lollipops placed seemingly randomly around its edges.

A single light source in the centre projected a beam of light 360 degrees, hitting every one of the sugary treats thanks to the way they were positioned.

The lollipops, created by Altatto and available for visitors to take and eat, were flavoured with Bergamot and covered in black popping candy to add an audible element.

In the next and largest space, equally dark, almost 12,000 strings of different lengths hung from the high ceiling. 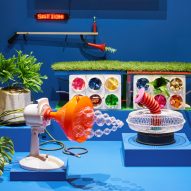 These were illuminated by another laser positioned close to the top of the room, which cast a horizontal beam that reaches all four walls.

During a repeated sequence, the white light slowly moved down towards the floor. As it did so, it began to pass the shorter strings, and continued downward until only a few points were left lit up.

"We positioned the strings very carefully so there was no bias in density," Ichikawa told journalists during a tour of the installation.

The laser then travelled back up to the ceiling, with white noise played into the room increasing as more strings were re-illuminated.

Also in this space were furniture pieces. A bench was lit up from within its centre, so its multiple legs cast an array of shadows across the floor.

In the final area, finalists in this year's Lexus Design Awards were exhibited. The projects, which all responded to the theme "Co-", were displayed on panels around the edges of the room, with prototypes created by the four shortlisted designers and studios placed in the middle.

Milan design week took place from 17 to 22 April 2018. Catch up with Dezeen's coverage, or check out our post-event highlights including the most Instagrammable installations, the top emerging designers, best lighting designs and minimal bathroom launches.