A crowdfunding campaign has been launched to purchase the Stirling Prize-winning pier on England's south coast, which was redesigned by architecture studio dRMM.

Hastings Pier is currently for sale after the charity behind the project went into administration, less than a month after winning UK architecture's top accolade.

The Friends of Hastings Pier (FOHP), established after the Hastings Pier Charity went into administration, is aiming to raise £1 million to buy the structure. Its aim is keep it as a community-owned asset.

It has launched a campaign on online platform Crowdfunder to raise the first £500,000 of its £1 million target. The funds raised will be used to support a bid to commercial property agent GVA, which is acting on behalf of the administrators to sell the pier.

A price has not been placed on the structure, although the cost of the renovation amounted to £14.2 million.

According to the campaign description, the organisation needs to raise at least £1 million pounds to demonstrate that it can maintain the pier for two years.

"Otherwise it will be sold to a private owner," warns FOHP.

The campaign has currently raised more than £38,000 of its target of £500,000. FOHP intends to raise the remaining £500,000 by match funding from grants and other charitable donations.

The newly formed organisation hopes to realise phase two of the development plan for the pier, which involves the creation of a more covered space on the deck. It claims that the failure to complete this part of development was one of the reasons the pier was not financially successful initially.

"Phase two, which would attract further investment to build infrastructure and a major events programme to make the pier profitable long-term, was neglected, possibly even forgotten, which is why the pier went into administration," said FOHP.

The century-old Hastings Pier reopened in April 2016, following an extensive renovation by dRMM. It had been closed for eight years, following a devastating fire.

The redesign involved stripping back the pier's poorly constructed commercial booths to create an open, multipurpose space. It also included the construction of a visitor centre that doubles as a huge seating area. 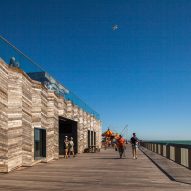 The architects have offered to design structures for phase two of the development, up to planning stage, for free.

"The pier needs more covered space to extend the commercial season and provide a daily income, and that's what we are offering to design," Alex de Rijke, founding director of dRMM told Dezeen.

"The brief was for a flexible building on the promenade and our visual is an example of what could happen."

However de Rijke insists that the open-plan space at the end of the pier will not be filled with new structures.

"The dream of having big concerts there has not yet been realised, as to be honest the charity did not have time to get going on that," continued de Rijke.

"But it is very important to maintain the space of open possibility at the pier's seaward end."

The project won the Stirling Prize in October 2017. Judges described it as a "masterpiece of regeneration".