Graduate Lilach Borenstein has proposed creating a multi-storey tower with varied topographies as a monument to tranquility and antidote to hectic urban living.

Monument of Void was created as part of Borenstein's graduation project from the architecture programme at the Bezalel Academy of Arts and Design in Jerusalem.

Borenstein developed the project in response to a lack of meaningful monuments erected recently in the West, which she attributes to an increasing focus on constructing high-rise architecture for financial gain.

"The only monuments being built in the West, and consequently elsewhere in the world, are global totems to money and technology," said the graduate.

"This thick jungle of enormous towers fills the hearts of our cities, leaving the human subject dizzy and breathless."

As a counterpoint to the distractions and "cultural racket" that Borenstein feels now defines many urban environments, she proposed a modern monument that seeks to celebrate silence and promote interaction between city dwellers.

The multi-storey tower provides spaces for people to escape from computer screens and experience some separation from the bustle of urban life.

"It must be a whole universe unto itself," she suggested, "capable of severing its visitors from the city's physical and mental congestion, offering a means for pausing, taking a break, reflecting, resting and finding a refuge from the wild and hectic metropolises that have forgotten to stop and breathe."

Borenstein developed the concept with a specific site in mind – the busy and congested Israeli city of Rishon Lezion – but suggests that it could be implemented in any metropolitan setting.

The building features a series of stacked spaces intended to provide individuals with a choice of environmental conditions and terrains so they can select a scenario that suits their mood or personality. 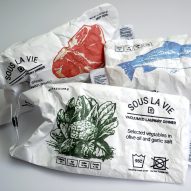 The height, humidity, temperature, sound and topography of each level would be different to evoke a range of natural features, including a glacier, ocean, mountain, cave, forest and desert.

"Each floor stimulates the visitors' senses in a unique manner, but all of them share a white identity in order to neutralise any sense of overload," Borenstein pointed out. "In addition, cellular signals are jammed to prevent distractions."

Personal glass elevators distributed across the square plan would provide access to the different levels. Paths with varying levels of difficulty aim to tailor the experience further so visitors can explore whichever route feels appropriate at any particular moment.

To demonstrate the principles and forms proposed in the project, the graduate produced small models using a 3D printer and used a 7-axis computer-controlled milling machine to carve a large model at a scale of 1:100.

More from Bezalel Academy of Arts and Design