US studio Cutler Anderson Architects has wrapped this house in Connecticut around a large pond so its residents can watch birds, fish and insects at play.

The firm designed Connecticut Residence for a family of five with the aim of causing "minimal disturbance" to its rural setting among 4.3 acres (1.74 hectares) of woodland.

Among the main challenges was to accommodate a large pond. Cutler Anderson Architects responded by separating the house into three volumes, which are arranged around the water feature.

Horizontal cypress boards clad the exterior, left unfinished to weather over time and blend in with the natural setting. Large amounts of glazing are placed along the inner walls facing the water.

"The design attempts to make the pond and home a single entity," said the the studio in a statement.

"The large pond acts as a focal point for the homeowners and now brings birds, fish, amphibians and aquatic insects to their daily experience."

As the site is sloped, parts of the three volumes are raised above the ground to keep all of the accommodation on one level. Narrow, raised walkways reminiscent of the bridge that provides access to a residence that the studio built atop a pool in Oregon provide a connection between each.

The longest walkway bridging the pond has three sets of glass doors that open onto the water's surface.

Each of the volumes contains a different function of the family house. 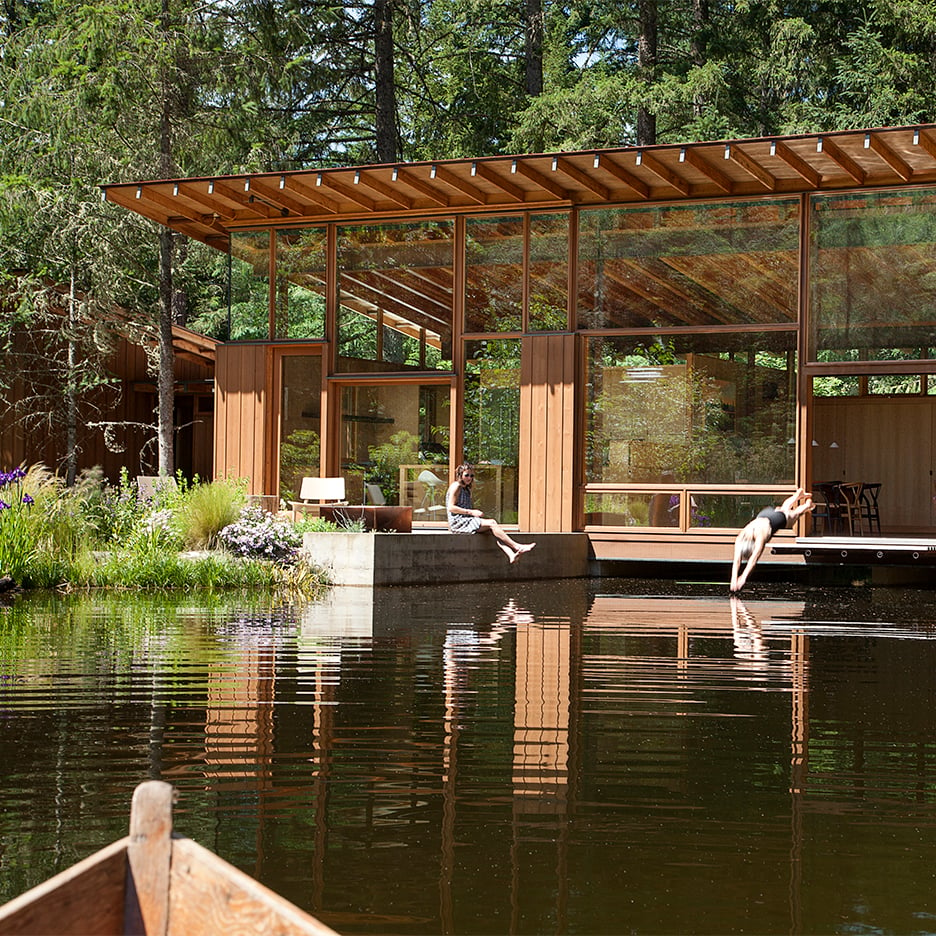 The entrance to the residence leads into the home's common areas. Here, the kitchen separates the family room from the south-facing, open-plan living and dining room, which receives plenty of natural light.

A balcony extends these spaces towards the forest and forms an elevated platform for the residents to enjoy the outdoors in good weather.

On the eastern side of the property, the second volume contains three bedrooms, each with an ensuite. A series a small entry volumes provide a buffer the rooms from the public corridor adds some privacy.

Floor-to-ceiling glass walls enclose the bedrooms, giving expansive views to the forest beyond. Glazed corners and cylindrical columns offset from the walls are among the intricate detailing.

Accessed by the long walkway, the third volume on the northern side of the pond contains two additional bedrooms, as well as the home's garage, which is accessed from a side road.

Similarly to the other bedrooms, each of these rooms also has a private bathroom and small vestibule separating it from the rest of the home.

As a continuation of the wooden exterior, douglas fir features abundantly inside the property, lining the walls and forming doors. The wood gives off a red hue that adds "warmth" to the property against the pale painted walls.

The house has a structure made from glue-laminated timber, also known as glulam, which is manufactured by layering up multiple slices of wood and gluing them together. This is also left exposed across the ceiling.

Other materials that nod to the natural setting include large stone floor tiles. Furnishings are selected in pale grey hues to complement this.

The clients also asked the studio, which is based in Bainbridge Island, Washington, to make the house zero-net energy. This means that all energy used by the residence equals the amount of renewable energy produced on site.

Geothermal sources heat and cool the home, via 14 wells spread throughout the site, and an array of solar panels on the roof provides additional electricity.

Cutler Anderson Architects was founded in 1977 and is led by architects James Cutler and Bruce Anderson.

The firm has completed a number of residences in the North America that make the most of their natural settings. Examples include a farmhouse in Pennsylvania that can be enclosed by large rolling shutters, and a Canadian residence tucked between rocky outcrops.

Photography is by David Sundberg of ESTO. 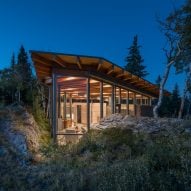